Have you ever had a joke in your head that you thought was hilarious? Maybe an inside joke amongst friends or something you thought up of randomly? What if you had a portable, fast, and easy way of creating a web-comic so you can share it on Facebook? Create A Comic gives you that and makes it easy. Created by Tilted Chair, Create A Comic is available for comic making on the iPhone, iPod touch, and iPad for $1.99.

To get started, you just tap a character to set them on the screen. You can then tap them to move them around, add text boxes of different types, and then give them a pose for your screen. There are currently 7 different characters: A bearded guy, an average Joe, a balding business suited man, Jesus, a woman in a dress, a mustached man, and a lady in business attire. They all have different emotional poses that involve arm positions and a single pose that features a red face. 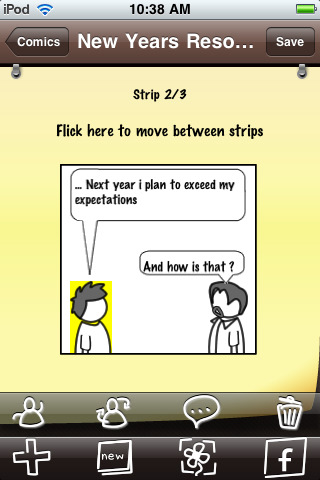 This is all you really need. Text bubbles give you different effects like shouting or thinking, and you can place the characters anyway you want. Create some pages and start. Each time you save, they will appear as a single image with a multi-panel structure. No need for multiple chunks to upload or using Photoshop to compile them together. Instant web-comic.

The price of this app is nearly $2 however. With that price tag, I would expect a few more features. More characters, customizable characters, the ability to resize or rotate a character and his text bubbles, and maybe some way to use our own images? I have a mean joke involving a waffle and a dog that can’t be made because of the limitations. How dare you stop on my creativity!! *joking* 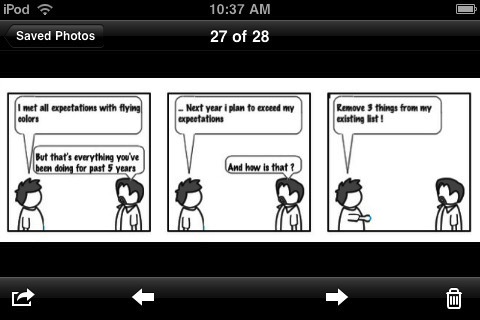 Create A Comic is a nice start to what could be one of the easiest and most entertaining method of creating simple web comics. If you don’t mind the lack of content at the moment at version 1.0 and don’t mind not drawing your own characters, this is an app you should pick up. If you’re like me, however, I would wait until this app releases some updates.

This 3rd Party App is available at the Apple iTunes AppStore. Browse the full list of all AppStore apps filed under the AppStore category.
Download Create A Comic at iTunes App Store
Price: $1.99
Developer: Website
AppSafari review of Create A Comic was written by Joseph Ho on October 28th, 2010 and categorized under App Store, Art. Page viewed 6262 times, 1 so far today. Need help on using these apps? Please read the Help Page.