Simplicity is Terrific. Twitterrific is a well know feature rich Twitter app for the iPhone and iPod touch created by award winning icon designer Craig Hockenberry. The app contains a ton of features, and yet is kept clean and simple with crisp graphics. You can add and manage multiple Twitter accounts, search Twitter, filter tweets and much more. The $5 paid version has no built-in ads. 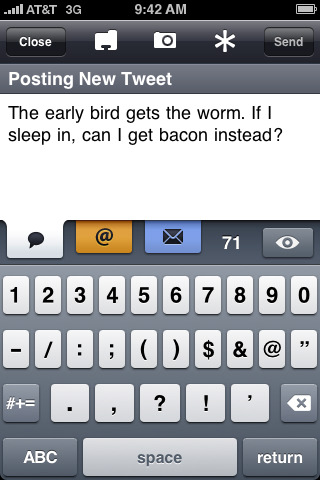 Previous to the App Store’s opening, the developer released this app as a native 3rd party iPhone application called MobileTwitterrific on Google Code. An iPad version of Twitterrific has also been released.