Okay, let’s face it: we can’t all be Twitter celebrities. Some of us just aren’t cut out to effortlessly banter with our famous and technologically savvy friends in public. Maybe we don’t text fast enough. Maybe we’re just shy and not quite ready for the Twitter spotlight, but that’s okay. The world needs sheep too, and apps like Followformation are here to help. Followformation aspires to help us little guys find all the popular Twitter feeds we desperately crave.

By organizing all of the top Twitter feeds into a variety of categories and locations, Followformation tries to make it simple to preview and add the most popular feeds. You can select an interest, like “Comedy”, and see the most popular comedians displayed by their user name and a bio line. You can click on a name to preview the individual feed or just start quickly add all of them at once. 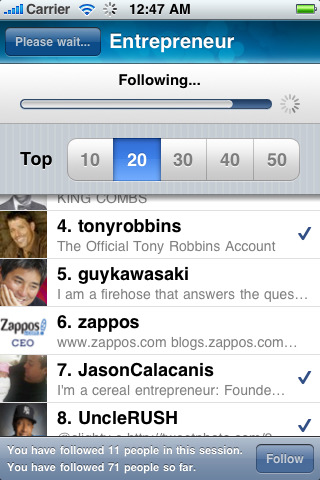 I can see why this app might appeal, but I found it awkward to use and with seriously lame results. Maybe if I were the kind of person who didn’t have time to select which feeds I wanted to read and wanted to follow all of the popular entrepreneur feeds, it might make sense, but if I were that kind of person, I wouldn’t have time to read those hundreds of indiscriminate, albeit popular, tweets. Part of the problem lies in the organization. The categories are very broad, mostly cribbed from the official Twitter categories, and although you have the option of vetting all of the feeds before you add them, it’s a real pain to thumb through dozens of pages, making sure that the five you don’t want included are checked off.

There’s a problem of a different sort when you try to sort by location; namely, it probably won’t be there. I live in Boston, one of the largest cities in the U.S., but you wouldn’t know it even existed by looking at this app. Admittedly, most of the major Twitterers are going to be in New York, San Francisco, or L.A., but are they really going to tell me there are no popular Twitter feeds coming from Boston? Or Chicago?

Had Followformation created more specialized interest categories, I could see this being a really useful tool. Trying to find the most popular Mac developer feeds? There you go! Got a burning interest in child T.V. stars from the 80’s? It’s your lucky day; we’ve got 12 of them tweeting just for you! As it is, the options are too broad to be useful for adding en masse. It’s far simpler and more satisfying to browse and cherry pick from the popular feeds through Twitter (for free) or any other of the dozens of Twitter apps out there, rather than paying for the option of indiscriminately adding hundreds of tweets to your feed.