Twitter is the biggest new social networking beast to have appeared in recent memory. From celebrities to family to your local app reviewer (thaaat’s me!), everyone seems to have one. Something this widespread has to have an app, and there are many Twitter clients that have popped up in the App Store; in fact, Twitter has just released one themselves. MotionOjb is another developer who has one out in the marketplace called SimplyTweet, with 3 being the latest incarnation (it is now in version 3.1).

Be sure to tweak your settings in the device’s Settings app–it’s not found within the ST3 app itself. There, you can change the theme and set up which services to use for URL shortening, photo/video uploads, etc. Personally, I feel that one of the best options to toggle is the “Load All Unread Messages,” as I hate feeling like I’m missing out on something cool while I’m not chained to the internets. You can also configure your Swipe Menu, which is a neat option that pops up every time you swipe your finger across someone’s tweet.

SimplyTweet 3 has all the basic functions of a Twitter client: tweeting, replying, direct messaging, posting images, and favoriting are all there. However, it is is an improvement from SimplyTweet 2, as it supports native retweets, native lists, a composing control panel, offline caching, and tweet image preview, amongst many other things. The handy control panel is found behind the keyboard when you’re composing a Tweet; just tap the tools button on the right to reveal it. It includes URL/text shortening, photo upload, geo-tagging, and the very cool hashtag directory, where all the hashtags you’ve ever used in a tweet can be found. 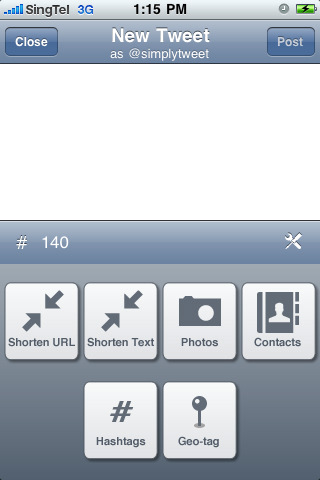 If you tap on someone’s tweet, it will open up in its own window, with a photo thumbnail as a preview if there is any. To reply, just tap the arrow on the top right corner; for every other action, you have the entire bottom toolbar. You can RT the “new” or old way, show the flow of conversation, and even translate the tweet if it’s in a different language, along with a host of other options. Forget exactly what you’re replying to? Never fear, ST3 assures that you’ll never have to rewrite your reply by allowing you to check the message you’re replying to: just tap and hold the Compose screen and pull it down to reveal the parent tweet. And for people in possession of larger fingers, every screen supports landscape orientation.

As you can probably see, SimplyTweet 3 offers a dazzling plethora of functions to work with–and the above is only scratching at the surface (for a full, comprehensive listing, see their website or their description in the App Store). What’s even better is that ST3 remains intuitive and simple enough for a user to catch on fairly quickly, truly designed for comfortable use in mind. It may not be the prettiest Twitter client out there, but it certainly is the one closest to full-on computer usage of Twitter…trust me, I’ve gone through an embarrassing number of Twitter clients trying to find one that works well and is up-to-date with all the updates Twitter has implemented. SimplyTweet 3 really pulls ahead of the pack, and is highly recommended for heavy Twitter users, even with the $4.99 price tag.

This 3rd Party App is available at the Apple iTunes AppStore. Browse the full list of all AppStore apps filed under the AppStore category.
Download SimplyTweet 3 at iTunes App Store
Price: $2.99
Developer: MotionObj
AppSafari review of SimplyTweet 3 was written by Julie Guan on May 30th, 2010 and categorized under App Store, Chat, Fun, Social. Page viewed 4339 times, 1 so far today. Need help on using these apps? Please read the Help Page.