Along with Glee’s much-anticipated mid-season premiere this week comes the unveiling of its official iPhone app counterpart, also (stunningly enough) named Glee. Developed by Smule, the same group who brought you the popular I Am T-Pain app, it is a combination of signature Glee brightness, interactive musicality, and social networking–with a twist.

Be advised that you need a microphone for your Touch if you want to use this app. It’s not just a sing-along, karaoke type of musical app…it also records your singing over a Glee track with auto-harmonization and pitch correction, if you so choose (just tap the red bar below the lyrics). You may be the soloist, but the auto-harmonization can turn your voice into a group of people. Stars explode from the lines down below if you’re singing correctly; it’s like a Rock Band vocals set-up, except green lines represent the main melody and blue represents harmony. You get three tracks with the app download, but every track after that costs $0.99 (tracks are added every week). Or you can create your own tunes by choosing the A Cappella option. 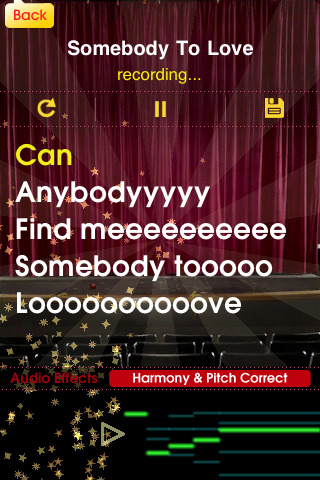 After your voice has been enhanced and beautified on the tracks, they can be shared with the world: emailed, on Facebook/Twitter/MySpace, and uploaded onto the Glee Globe (also known as the Smule Sonic Network). Once uploaded, anybody can hear your track–but the cool thing is, they can also join in! That way, you can start your own virtual Glee Club, with Smule as the coach: it will do all the work in making sure your voices blend together correctly. You can also just listen to everybody else’s recordings around the Glee Globe, and award them with a gold star if you particularly enjoyed it. You earn a Gleek every time someone gives you a gold star or when you upload a song onto Facebook/MySpace.

Gone is your excuse of “I can’t sing”–just relax, let Smule handle the hard work, and let your inner star shine. With this app, everybody has a chance to both be a star and part of something bigger. Glee is a musical television phenomenon (something we need more of) that strives to include and showcase those who normally would be the underdogs, and the app certainly manages to recreate that spirit.

Note: A customized Glee app is also available for the iPad. The iPad version is free if you’ve already bought the iPhone version of Glee.