ZombieBooth is an entertainment app. by MotionPortrait, Inc. where you can take a pre-existing still photo and turn it into a scary, moving zombie version of that photo. So if you have ever wondered what you, a friend, or family member would look like zombie-fied, you would love this app.

Once you upload a photo and the booth transforms it into a zombie, you can do a few things with it. If you tap near the zombie’s mouth, it will snap a bite at you. If you drag and pull with your finger, you can move the zombie’s face in any direction. If you shake your device, the previous version of the zombie will mutate into a different type of zombie. I couldn’t tell how many types there were, but they were definitely all gross and scary. The bloody mouth and teeth on all the zombie versions are by far the creepiest part. Also, the zombie makes noise- labored, animal like breathing with occasional pained screaming and chomping sounds when biting. 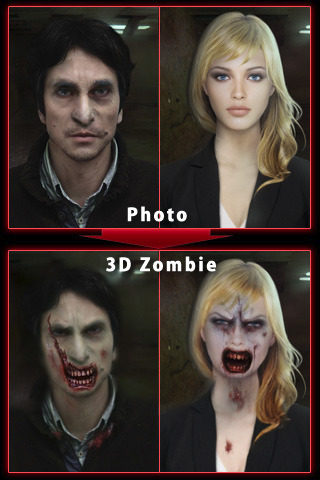 Once your zombie is on the screen, you have the option of sharing your zombie by putting in on your facebook page, uploading it to twitter, emailing it to someone, or saving it to your phone. From the main page, you can upload a new photo or go to ones that you already uploaded. There is a saved sample face that comes with the app. in the “open” section. You can also tell a friend about the app. or go to the MotionPortrait website by pressing the “i” in the bottom right hand corner of the menu screen.

Besides the features I have already mentioned, ZombieBooth doesn’t do anything else. I’m not sure that it has to, I kind of like how focused its purpose is. However, if you are looking for a complicated zombie app. with lots of features/options, you will be disappointed. I do kind of wish that I could zombie up my own pic- instead of it just being an automatic transition, I’d like to be able to pick out the zombie features I like. I think the increased interaction would make it more fun. Also, I would like it if the zombies said words, and maybe ate some brains.

If you are into zombies/horror/scary things, then I’d say spend the $0.99. These look like real, gross, frightening zombies, not cute video game zombies. Don’t say I didn’t warn you.

Here is a video demo of the ZombieBooth: Alive in 3D photo app on the iPhone