This is one of those things that, regardless if it’s good or bad, I feel compelled to try, just because the description sounds so weird. iTripping makes the claim that delayed movement is “scientifically proven” to relax, and “[s]tate-of-the-art images, specially designed for iTripping, will ensure augmented perception and smooth lightness of thought.” Translation? Touch the screen and the psychedelic ball will move, but it’ll take a second. I know, mind-blowing, right?

Unfortunately, it’s hard to tell if iTripping actually works, or if I just feel more relaxed because it’s bored me to death. I was kind of hoping for something more weird, but this was just dull. I remember my mouse doing the same kind of “delayed movement” they talk about on terrible old computers, and that only ever frustrated me, so I find their original research a little suspect. 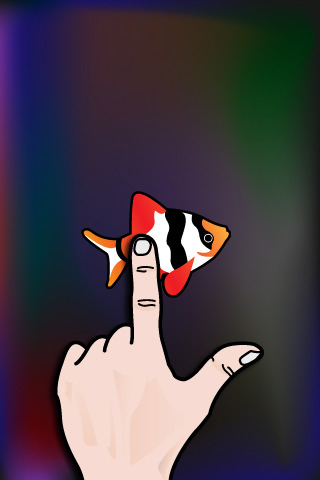 There is no start menu or instructions to be found in the app, but there is additional information to be found at the App Store, because heavens knows you’ll need to do your research if you want to make this the most productive and scientific relaxation experience you can.

If you double tap the screen, the image changes, although the options are neither particularly varied or attractive. In addition to the ball, you have your choice of a poorly illustrated fish, chair, butterfly, and skull. I liked using the skull, personally, because who doesn’t find Death a constant and comforting presence? You can also shake the device to start some music, because naturally lousy techno music is also scientific and therapeutic in some way.

Of course, the developers also state, “We don’t guarantee the effects and facts hereby stated, but we are sure we made our best so that it will work in a perfect way.” I’ve taken that to mean they have no idea what they’re doing, especially since their much praised delayed movement isn’t very smooth and rather glitchy to boot. My friend, the LSD Skull especially liked to get stuck in the corner.

As you can probably tell, I don’t put much faith in their “scientific” claims, and I get the feeling that the app is being marketed in such a way as to attract gullible New Agers and druggies who have hit that magical high where everything is deeply profound, but I don’t know. They could be dead serious and maybe even wholly accurate with their claims, but even if that were the case, I still wouldn’t pay money for this app and neither should you.

This 3rd Party App is available at the Apple iTunes AppStore. Browse the full list of all AppStore apps filed under the AppStore category.
Download iTripping at iTunes App Store
Price: $0.99
Developer: Website
AppSafari review of iTripping was written by Tracy Yonemoto on May 21st, 2010 and categorized under App Store, Fun. Page viewed 2994 times, 1 so far today. Need help on using these apps? Please read the Help Page.