Laughter is a form of therapy and can work wonders on your mood. If you are ever having a bad day and all you need is an original, knee-slapping joke to get you through it, this may not be the app for you. Extra Funny Jokes costs $0.99 and is compatible with the iPhone, iPod Touch, and iPad. I found that the app does not live up to its title: Instead of extra funny it should be corny incomprehensible jokes. 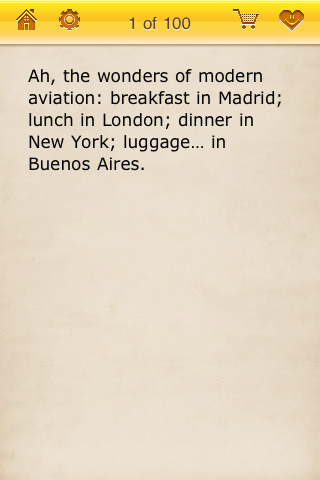 When you open up Extra Funny Jokes there is a taskbar along the top and the joke is typed out below. The navigating options you are given are home—which takes you back to the first joke—settings, a joke count—that shows you what joke you are on out of 100—a grocery cart, and an option to share the joke. In the last selection you can recommend the app through email, Facebook, or Twitter, you can share the joke through the same portals, or you can give a rating or review of the app to the developers. You use your finger to flip through the jokes as if there are pages. Here is an example of one of the worst ones, “Definition of a cactus: a really angry cucumber.” The punch lines are italicized just in case you didn’t notice, which can happen a lot with awful jokes. Another winner I came across, “You cannot treat Alzheimers. You can forget about it though.” On the positive side, it is a really easy app to use.

I have impossibly high standards for jokes. If a joke isn’t funny enough to make me break out in my obnoxious and boisterous laugh, then I at least expect for it to put a smile on my face. I don’t know if the bar was set too high because I installed this app the day after I saw Joan Rivers: A Piece of Work, but not one of the 100 jokes they give you is funny. It may be unfair to knock these jokes, because humor is so subjective, but I wouldn’t recommend this app to anyone.