Ask the Octopus iPhone app is here from uTouch Labs. If you watched the World Cup this year, you might have noticed a German octopus named Paul that accurately predicted the winner of the Final game in addition to the previous six matches. Now there is an iPhone app called Ask the Octopus that is riding on the popularity and success of Pual the Octopus.

The interface in Ask the Octopus app is pretty clean with cartoon style graphics. The octopus is a smiley happy little fella that lives in the far depths of the ocean, complete with bubbling ocean sound effects. You type in 2 choices, one at a time. Then the octopus starts to “concentrate before making a guess”, and descends down towards two boxes on bottom of the ocean with your choices written on their labels. After a few seconds he makes up his mind and slides over towards the winning box. 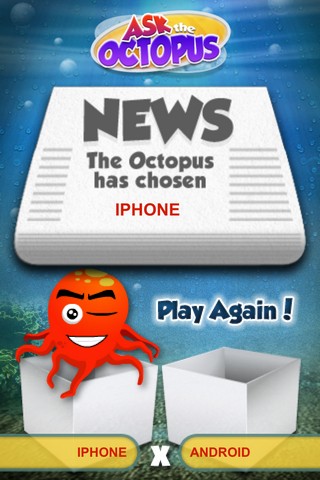 After the prediction a newspaper graphic pops up reading “the Octopus has chosen” your winning title.

The Ask Octopus app has no options or settings. You basically use it to do the same thing over and over again. The movements of the Octopus are the same every time, and the background music loop is quite short. In other words this app could use a little bit of variety to make it more believable and exciting.

Overall, if you were amazed by the Octopus’s power of prediction during the WC, then you might enjoy this app. If not then you can as easily flip a coin. To see the real Paul you can soon visit the Madrid aquarium, who are bidding to acquire the infamous German octopus.

This 3rd Party App is available at the Apple iTunes AppStore. Browse the full list of all AppStore apps filed under the AppStore category.
Download Ask the Octopus at iTunes App Store
Price: $0.99
Developer: Website
AppSafari review of Ask the Octopus was written by Joe Seifi on July 15th, 2010 and categorized under App Store, Fun, Polls. Page viewed 5262 times, 3 so far today. Need help on using these apps? Please read the Help Page.