One of my biggest pet peeves with technology these days is the Kindle, a device I believe should receive full blame if the publishing industry ever chokes on its last breath, keels over, and dies. In light of my beef with virtual literature comes DC Comics, a free app created for nearly the same purpose. The difference however is that this app is not a program to view comics with. Instead, it categorizes different comic strips, gives you a brief description of each one along with information about their respective origins, and locates the stores in your geographical area that sell them. Seriously, if this application existed sixty years ago every social reject in America would have never left their home because they could just use this app to follow the coolest and latest comics and then order them online. 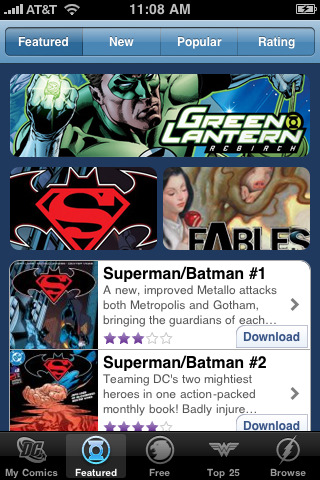 Getting back on track here, DC Comics, the app, is actually pretty cool if you consider that DC Comics, the company, has provided fans with endless entertainment and imaginative characters for decades. This is true to the extent that they have coined something called the “DC UNIVERSE,” proudly nodded to in the app’s description in the iTunes store.

So, what can be found in this enticing DC UNIVERSE? Only the best and brightest illustrations full of color, action, fun, and flare! This app provides hours worth of material to digest at the push of your fingers. Of course, you can’t actually retrieve comics onto the device you’re using, but I can’t think of an easier way to stay in the loop in the comic world. It’s almost unfair that only those who own an iPhone, iPad, or iPod Touch have access to this. 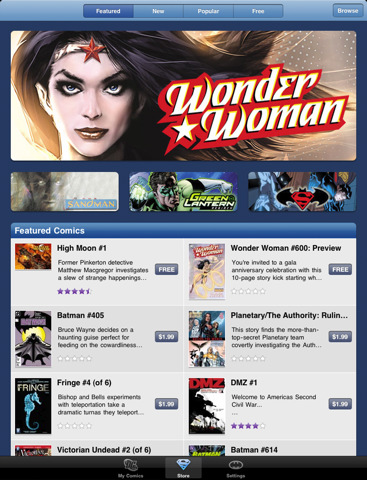 DC Comics has done for comics what Netflix did for video rentals; it’s a total revolution! Best of all is how it merges the old with the new. You have to admit that reading comics in the 21st century has become a little passe. While the fan base for such literature is still going strong, the people who comprise it–namely the ones who attend comic cons like it’s nobody else’s business–don’t exactly capture American youth like they did in the 1950s.

This new generation of comic fiends is all about technology and consuming literature, fads, and fictional characters like they’re dying to get their next fix. DC Comics has figured out how to cater to the beast. Because it is so user friendly, I have a feeling the beast won’t bite the hand that feeds it. Go get some! And don’t forget, the Kindle is just comic relief to a real book, it is a total wannabe. Don’t be a Kindle, be a good boy or girl and rekindle your love for comics – DC Comics is there for you.