Card2Phone is a magic simulating iPhone app that attempts to create the illusion that there is an object lying on top of your screen. The app was developed by Jakob Halskov and costs $3.99. It is available for use on an iPhone or iPod Touch but requires iOS 4.1 or later.

The app is centered on magic (trickery) and you get a choice of seven different objects to use. The objects include, Red, Blue, Green, White, and Vintage Bicycle Playing Cards, U.S. Quarters, Half Dollars, Silver Dollars, and Dimes, Euro coins and bills, U.S. dollar bills, Australian 10 and 20c, Mexican Centavo, and English Pounds.

Once you have picked an object, you choose a background, from the photo library in the device you are using, to match it up with. When you hit start, the background you chose pops up and you have to shake the device downwards for the object to fall onto the screen. The fun begins once you have a visual of the object. It arrives on scene looking as realistic as possible, considering it is a computer generated graphic, and moves when you tilt or touch the screen. I can only think of one use for this app that might be somewhat entertaining. This use involves a person who is intoxicated and any of the higher value currency objects. You can trick a friend into thinking that you left some money on top of your phone or iPod. Sure, this joke will last mere seconds and will not accomplish much, but at least I have thought of an actual use for Card2Phone. 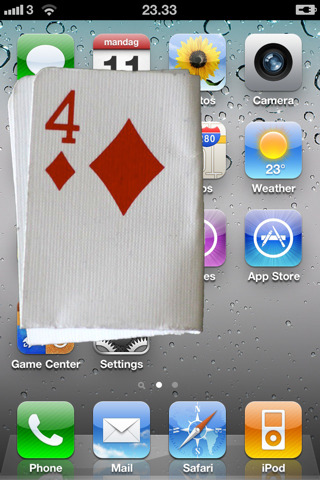 Why this app costs so much is a mystery to me. You can drop an additional $2.99 to upgrade to Card2Phone Pro from within the app if you feel the need. The upgrade consists of more objects including a cigarette, Coke cap, Corona cap, Oreo, and Sweet ‘n Low (?).

I do not consider this app a necessity, but it is not entirely useless either. I think I would be more inclined to recommend it if it was priced more appropriately. If you have money to burn and love to inflict practical jokes on your friends then get yourself Card2Phone.

Here is a video demo of the Card2Phone – Magic: Coins and Cards to Phone app on the iPhone

This 3rd Party App is available at the Apple iTunes AppStore. Browse the full list of all AppStore apps filed under the AppStore category.
Download Card2Phone – Magic: Coins and Cards to Phone at iTunes App Store
Price: $3.99
Developer: Website
AppSafari review of Card2Phone – Magic: Coins and Cards to Phone was written by Vanessa Paszterko on November 17th, 2010 and categorized under App Store, Fun. Page viewed 13340 times, 2 so far today. Need help on using these apps? Please read the Help Page.

8 Comments to “Card2Phone – Magic: Coins and Cards to Phone”