The Hotlist sounds like something that would be used in an episode of Gossip Girls, but is actually one of the latest attempts to utilize familiar ways of social networking to your advantage. Released earlier last year by an eponymous developer, The Hotlist aims to show you where the parties are at. To use it, you need an Internet connection (to use the GPS function) and a Facebook account.

Once you log in with your Facebook account, you can see what your Facebook friends are up to in the Friends tab. Locations your friends have checked-in at will be listed by distance, starting from the ones nearest to you; listings will also include the number of friends at each location, so you can see which place is hoppin’. Tapping on a location will expand on which friends are there, location details, and helpful information like the male-to-female ratio and tweets/reviews concerning the place (pulled from Twitter, Foursquare and Yelp, if available). If you tap on the map thumbnail, you can view where it is on a map and get directions. 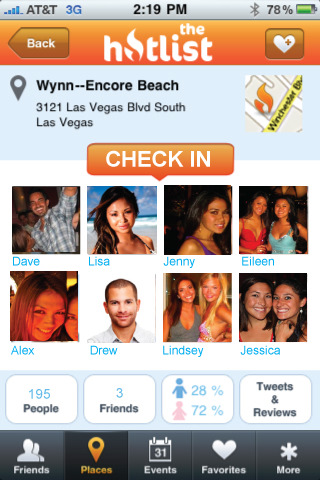 There is also an option to check-in or put a location/friend on your Favorites list (tap the heart icon on the upper right). Putting together a Favorites list will give you a personalized Hotlist that you can use to plan outings. You can also tap on the friend’s thumbnail picture to expand on their profile: for instance, where they were/are, their upcoming events, and favorite places. Coordinating a party (especially surprise parties) is a cinch.

The above set-up is similar for everything under the Places and Events tabs: locations are listed by distance, and can be expanded when tapped on. However, instead of the number of Facebook friends, these tabs will list all the random people who’ve checked-in at that location. You won’t be able to view their profiles, but you can still see the guy-to-gal ratio and read up on locations. There over 1.2 million venues in more than 86 cities featured in this app, so if you’re up for a little adventure or want to make new friends, these two tabs would be very useful to you. 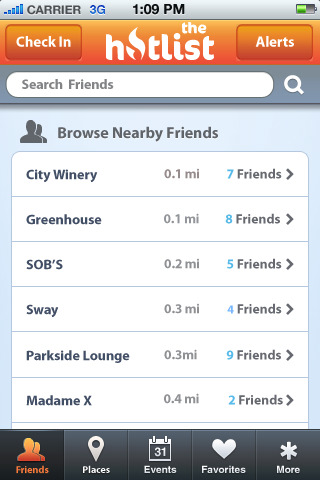 In fact, this entire app is extremely useful, if somewhat creepy. The Hotlist puts a firm emphasis on the word “networking,” so if you’re not one for intense social networking (example: you have your Facebook profile locked up tighter than Fort Knox), this probably is not the app for you. However, if you do want to stretch those social butterfly wings, The Hotlist is a great way to do it…just make sure you have the Facebook check-in function turned on. And that you have friends who actually use it, if you want to use this app to organize an get-together. I think that this app is best utilized in a completely new (urban) environment, like if you were visiting an area and wanted to scope out the night life. I’d like it to be a bit more organized, as there are many functions and lists to look at; a Categories filter might be useful, if I wanted to go to something more intellectual than clubbing. The Hotlist is a really neat app, if only simply by virtue of being able to pull together information from three different social networking sources. Once you get familiar with the app, it can help enrich your life greatly. It won’t even cost you a cent.