Helium-Balloon is a fun app that makes your voice sound as if you just inhaled a ton of helium. There are three different prices for the app: $1.99, $0.99, and a free lite version, so take your pick. The app was released by Gerrit Wijnants for an iPhone, iPod Touch, and iPad.

In order to start the fun you are directed to inhale from the speaker on your device and the giant green balloon that has grown on your screen begins to get smaller. When you are done inhaling you are prompted to speak into the microphone and on the next screen is a smiley-faced yellow balloon that says your recording back to you.

Whatever you say and no matter how much you “inhale” the voice that gets played back to you has the same weasel-like quality that anyone who has sucked in helium knows well. You do not have to “inhale” for your voice to morph but in order to move to the next screen to record you have to touch or breathe into or suck the microphone on your device. You only get 13 seconds of recording time, so you are out of luck if you wanted to record the Bill of Rights or anything else lengthy. 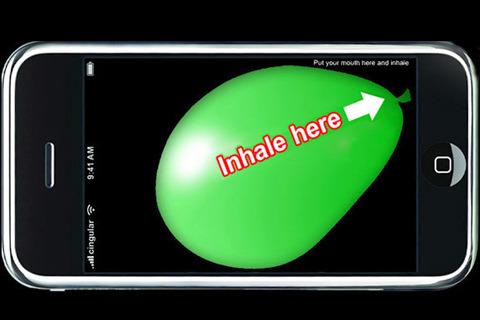 My guess is that you will not be playing with Helium-Balloon long so a quick “hello” should suffice. Of course if you want to look really cool you can share the recording on Facebook or via email, “Hey friends, guess what? I just inhaled a bunch of fake helium…listen to this!” You can play the recording back to yourself as much as you want before starting over.

I am not going to lie; when I first downloaded Helium-Balloon I was delighted with it. If you are interested I would suggest trying out the lite version first because the app is one of those that you do not need to use more than a few times. After laughing for the first 5 minutes and recording a message for my sister to hear in the hilarious helium-induced mechanical voice that the app provides I was ready to toss it.

Sample the free version of Helium-Balloon on your iPhone.