With the new iPad app Harry Potter Film Wizardry by Insight Editions Harry Potter fans can explore the Harry Potter films deeper than ever before. Other iOS apps about Harry Potter such as Harry Potter: Spells (iTunes $2.99) allow you to practice casting spells and duel with other iPhone owners. Film Wizardry is the first app dedicated to all of the movies as well as the inner workings of the films. This iPad app features an excellent interface allowing users to feel a part of the magic. It offers numerous articles interviewing actors, directors as well as other people involved in the books and movies. The app also features articles describing how the movies were made including the props, sets and makeup for the actors. 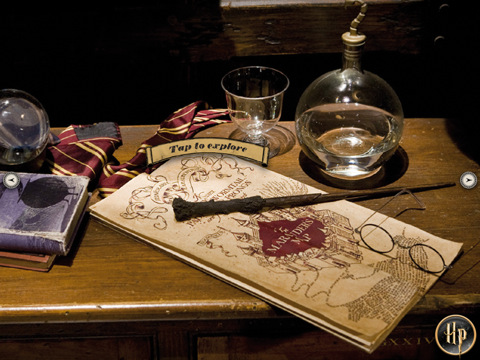 Film Wizardry is loaded with pictures and trailers from each movie with links to purchase the movie and books as well as a store to buy other Harry Potter items. 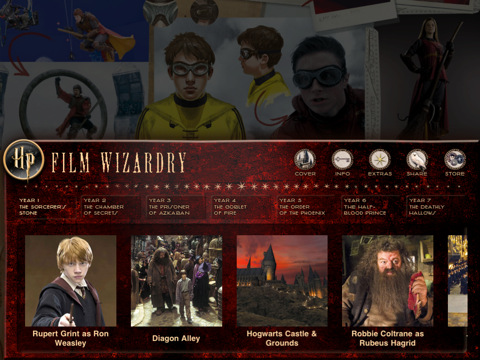 The app does not lack any attention to detail. Just like the Harry Potter movies, each section of the Film Wizardry app uses unique designs and features. The interface allows you to scroll down and read the rest of any article, while you can optionally scroll sideways to move from one to the other.

There is also an extras section in the app that has exact copies of various objects in the movies, ranging from Harry’s Hogwarts Acceptance letter to an invitation to the Yule Ball. 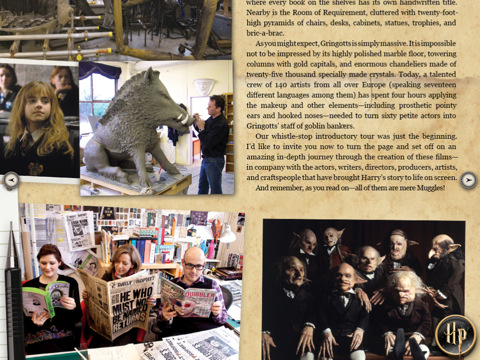 Understandably, the Harry Potter Film Wizardry app does not yet offer a gallery for the last installment of the series, but hopefully a future update will provide one. A downside to the application is that it takes up a large amount of space on your device. It is suggested that you have at least 2GB of free space available on your iPad before downloading as well as a high-speed WiFi connection. Only due to the large amount of space it consumes, I’m giving this app a 4.5 rating. At $12.99 it’s not cheap, but I would recommend it for any avid Harry Potter fan that wants to experience more of the magic.