The iPhone app Texts From Last Night (TFLN) is almost guaranteed to make anyone’s day better. Shortly after opening up the app, this was the first thing I read:

“(917): She started puking and I started running and I swear to god there was a wave of vomit chasing me down the stairs.”

The concept of TFLN is simple. Users can read or submit texts that are supposed to be from the night before, which usually involve parties or other activities that result in embarrassing but hilarious texts being sent. TFLN is not for kids!

Before downloading Texts From Last Night, I already knew what the desktop version is all about. The TFLN developers ported the web version into an app, giving it a sleek and elegant design. With five different tabs to browse, TFLN will easily provide you with at least few minutes of laughter. You can choose from Last Night, Top Nights, Random, Moderate, and Favorites. The Moderate tab is only available to use after making an in-app purchase of $0.99. This slightly annoyed me because of the application itself already costing a buck – I don’t even spend $2 on some iPhone games that can provide hours of entertainment in one sitting. 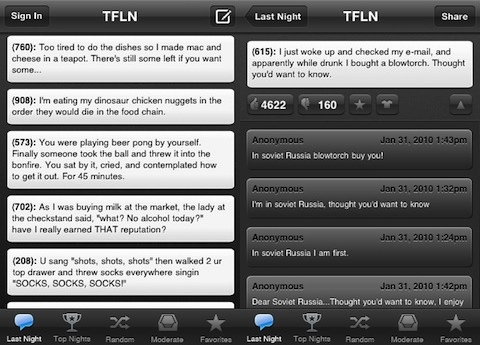 You can rate, comment, or just browse through the texts with absolutely no struggle. Your favorites can be viewed after logging in and selecting the appropriate tab. It’s incredibly easy to post a text too, just tap on the typical compose button on the “Last Night” tab, enter your area code and text, and hit submit. You don’t even have to sign in, but you must wait for it to be approved by other users who are moderating.

Concept:
Read or submit texts from last night that are embarrassing, silly, or just hilarious in general. Other users then moderate the texts. Once the entry is approved, other TFLN users can comment or rate the text by giving a thumbs up or thumbs down.

Ease of Use:
The simple but elegant design makes it easy to browse or interact with other entries. Registering or signing in is not required to comment, rate, or submit entries. Having an account is completely optional.

Value:
Definitely worth the buck, although you’ll have to spend another dollar to be able to moderate entries. Hardcore users won’t mind the small fee, but I decided to live without it.

Overall: You can’t go wrong buying the Texts From Last Night iPhone app for a buck, it’s my favorite iPhone app so far. Available for the iPhone, iPod Touch, and iPad. Unfortunately the iPad version of TFLN is a separate download and costs another 99 cents.