Wallace and Gromit Chat-O-Matic, which is available as an iPad, iPod touch and iPhone app is simple fun for fans of the series of all ages. So who are these people you ask? Wallace and Gromit are characters in a popular series of clay-animated films for children. Wallace, who lives in Lancashire, England, is an absentminded inventor and a cheese enthusiast, and Gromit is his intelligent, anthropomorphic dog. 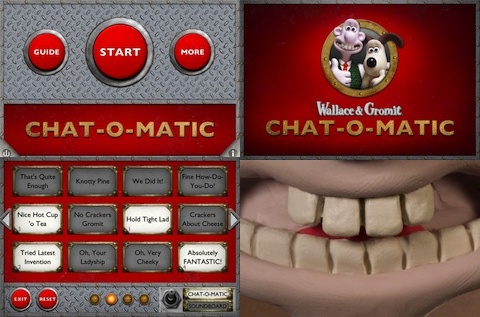 Best described as an audio-visual presentation application like Mouth Off, Chat-O-Matic by Widebeam Digital has 48 of Wallace’s most famous quotes, including “Someone’s been at me cheese.” When the Chat-O-Matic utters one of these quotes, the app displays a full-screen toothed Wallace mouth that moves in synchronization with the phrase and even displays emotion. The purpose of this is that the user, particularly kids, can hold the application up under their nose, and then the animated mouth takes the place of their actual mouth in humorous Wallace and Gromit fashion.

There’s definitely some fun here for young fans, and it might be a perfect virtual stocking stuffer. At $1.99, however, it may also be a tad overpriced. To us, $0.99 seems much more reasonable because an application like this has limited use. For adult Wallace and Gromit fans, we’d avoid this purchase altogether because you’ll likely try it once or twice and then never use it again. 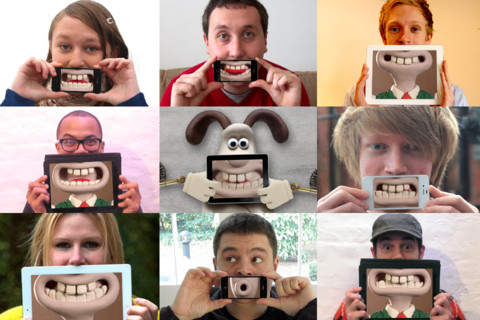 A nice aspect of the Wallace and Gromit Chat-O-Matic package is that it’s universal. So purchase and download it once, and that one install works on the iPod touch and iPhone as well as the iPad. In terms of differences between the apps, there aren’t any beyond the screen real estate available. The iPhone app displays a close-up of Wallace’s mouth, and the larger screen gives you more of a bust perspective, from the upper lip to the tie knot.

Perhaps the neatest aspect of the Chat-O-Matic app is that it uses the actual clay animation, so when Wallace speaks and laughs and frowns, he doesn’t just sound like the real Wallace, he looks like it too. Technically, Chat-O-Matic is a marvel. Practically, however, it’s less so. It’s certainly a cool soundboard for all of your favorite “Wallace’isms” though.