Like kit models, nerds come in all shapes and sizes, and now nerds who like kit models have their own app to while away the hours with their detailed creations. PLapp is an iPad app that brings all the meticulous attention to detail and care that comes with kit model building (but none of the glues or pigments).

Using PLapp is a very meta experience as you are simulating the act of simulating and the app is at pains to replicate the feel of kit model building – from the painstakingly crafted pieces you get to interact with, to all the little sounds that go along with it. My favourite part of the app is colouring, where you can apply decals and colours to your model. Because it’s not real paint, you’re free to get experimental and you can add little variations to classic designs (if only to irk the purists). 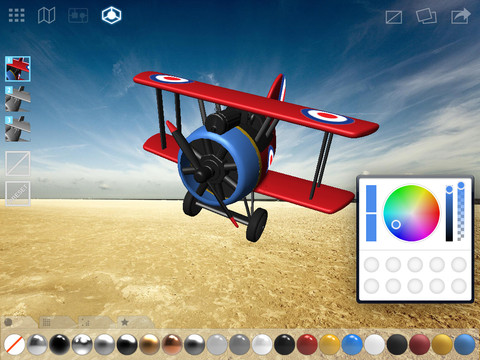 I haven’t spent a lot of time building kit models but I have spent large chunks of my life 3D modelling in Blender, 3D Studio Max and Maya. You have to really love meticulousness for that sort of work but after piecing something together for hours (or more realistically days) there’s an incredible sense of satisfaction. Kit modelling in PLapp works on the same principle, only without thousands of dollars of software and hardware slaving away in the background. There’s still a sense of “I made this” style satisfaction to be had from completing a model, even if there isn’t a tangible product in your hands at the end.

There are five models included with the app, including the legendary Sopwith Camel, the P47 Thunderbolt and the F-14 Tomcat. If planes don’t tickle your fancy, there’s also an Eggmotor C4 car you can build and a Eggbot N-11. The beauty of software means that if it so tickles the developers, they can add fresh models to the app, so it has significant expansion potential. 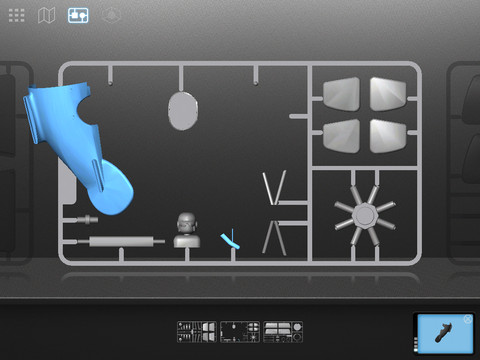 PLapp has been selected as the App Store (South Korea) Rewind 2011 Entertainment App of the Year. As a result PLapp 1.0.0 for iPad, normally $4.99 in the App Store’s Entertainment category, is available from Dec. 15-29 at the special celebratory price of $0.99. PLapp also received the Favorite Websites Award (FWA) Mobile of the Day Award. This is an industry recognized award program that honors creative mobile content. In addition I bestow upon it the honour of being “really quite good”.