The Sheeps is a puzzle platforming iOS app developed and published by Ivan Starchenkov for the iPhone, iPod touch and iPad. The gist of the game is that you control three different sheep, each of a different size, and have to use each one to solve complicated puzzles blocking your sheep from getting to their barn. Basically, get the sheep from the left side of the screen to the right. How is The Sheeps as a full blown application? Let’s break down it down in a review of the audio, graphics and overall content to see.

Graphics
The Sheeps takes a definitive page from Angry Birds in its graphical layout. The sheep themselves are easy to distinguish against the bright backgrounds, and each other, due to nice shadow and cell work. The physics of the graphics system are also satisfying, as when you lead the fat, heavy sheep onto a pulley, it slowly and clearly cranks gear by gear down. There are not any puzzles where the solution gets lost in the graphics or colors, and the iPhone app does a great job utilizing brightness to make its graphics attractive. 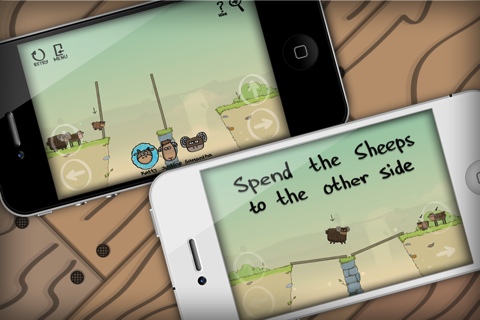 Audio
Fortunately, the develop of The Sheeps decided to go with the philosophy that simpler is better with regards to the audio in his app. The music in The Sheeps is really only noticeable on the opening menus and when you complete a level. Apart from that, the sound effects are bright, suitably farm-y, and do a nice job of allowing the player to focus on the puzzles at hand.

Content
There are over 30 distinct areas for your puzzling pleasure in The Sheeps, with each level building on principles from the last. One level has you use your small sheep to unlock a passageway for the large sheep to push blocks onto another switch, opening up the last passage for the medium sheep. The next has you reversing the process, but adding in a pulley system to boot. In these senses, The Sheeps keeps users coming back for more, as the actual puzzling element is addictive and easy to play. It certainly has mass appeal written all over it, as kids will enjoy the “ah-ha!” lightbulb moment of the earlier levels as much as adults will with the last few difficult ones.

The only downside the the game is that much like other popular iPod Touch and iOS puzzle games, getting sheep to the other side of the screen is simply not a strong motivator to keep playing for very long periods of time.

Overall
The Sheep is absolutely meant to be played in small, 2 or 3 level chunks, and not in an extended playthrough. Bottom line for the content is that if you like puzzle apps, you will enjoy the Sheeps.

3 Comments to “the Sheeps”