Hadouken! CAPCOM has released the official STREET FIGHTER IV game for the iPhone and iPod touch in the App Store. The first version comes in at a whopping 200 MB and delivers in every sense above and beyond any hardcore fan’s expectations with powerful sound effects, spanking sharp graphics, fast and smooth action packed gameplay and even multiplayer support over Bluetooth.

Controls in Street Fighter IV use a virtual 8 sided joystick on the left of the screen to block, jump, crouch, and dash using simple top, right , bottom, left movements. Your also get 4 action buttons on the right. Punch (P), Special Move (SP), Kick (K), and Focus Attack Button (F). Both Punch and Kick can be used in conjunction with the joystick to do special moves and super combos. The iPhone version of Street Fighter also brings back all the original features including the Revenge Gauge that supports Ultra Combos, and Victory by Special Move. The game menu is broken down into Solo Play, Versus, Stats, Invite A Friend, Get More and Special. Solo Play is where you will spend most of your time, and allows you to choose from Tournament, Dojo, Free-Sparring, and Training Room. 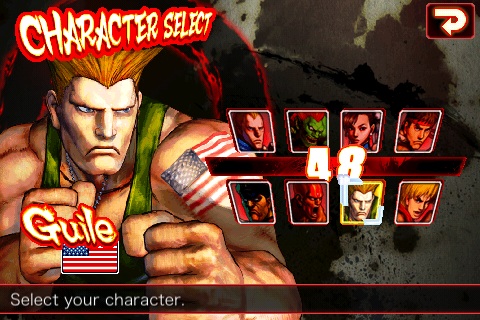 To get started, choose your difficulty level from Beginner, Normal, Hard or Grueling and set the number of rounds (1, 3, 5, 7). You can enable or disable the Special Move Assist and Auto Gaurd. Choose your character and character color to get going. STREET FIGHER for iPhone includes the 8 original fighters: Ryu, Ken, Chun-Li, Guile, Blanka, Dhalsim, M.Bison and Abel. Consumate Figher Ryu from Japan, Peerless Riva Ken from USA, Avenging Daughter Chun-Li from China, Crime Overlord of the Shadaloo organization M. Bison, Mystic Warrior Dhalsim from India, Genetic Superman Abel from France, Feral Survivor Blanka out of Brazil, and Stoic Soldier Guile hails from .

During gameplay you can access the settings page where you can view the Command List, which including all the moves and matching combos broken down by character using a very extensive and easy to follow table format. From here you will be able to easily view all the Normal Throws, Unique Attacks, Special Moves, Super Combos, and Ultra Combos. The training room is a great place to go and try out all the move and improve your attacks and defenses. Pick your fight stage from Drive-in at Night, Crowded Downtown, Inland Jungle, Small Airfield, Old Temple, Cruise Ship Stern, Training or Random. 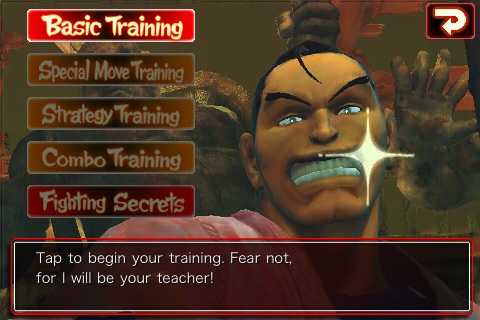 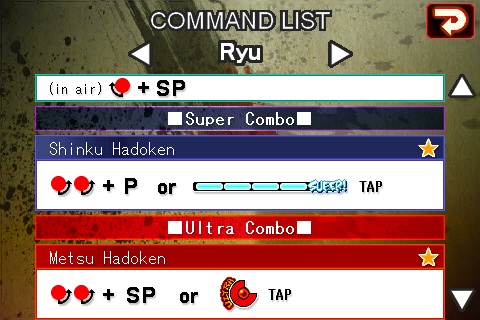 If you’re not too keen of the placement of the controls, going into the game settings you’ll find that you can fully customize where each button is and how transparent they are over the gameplay. Each game has a 3-5 second loading screen which s good enough to let you collect your thoughts and maybe give your fingers a little break, while you read some random tips about playing the Street Fighter IV iPhone app. You can also change your screen orientation in the options section and change the sound level and language between English, French or Chinese. If you’ve never played SF IV before (which is hard to imagine) there is a full help screen that explains everything quite nicely which you can get to by tapping the ? icon. 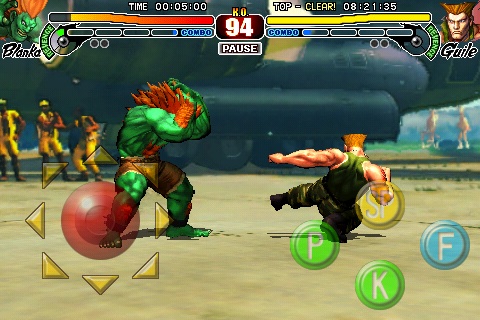 In Versus mode, Street Fighter IV uses Bluetooth to find local iPhone or iPod touch devices that you can connect to. It is recommended for this feature to work better that you turn off your Wi-Fi and that besides the two players, there are no other devices in your close proximity.

When you finish any solo play mode you get to watch a special version of the movie footage for Super Street Fighter IV, like the one you can watch by tapping the special button on the main title screen. The Stats screen is where you can replay saved replay videos, and see your versus and tournament stats summary, as well as change your player name.

Unfortunately the game does not save your progress if you quit out of the app in the middle of a fight. It also does not offer online playing capability which would make this game a must own, given the excitement of playing a live opponent. Nevertheless Street Fighter IV for the iPHone and iPod touch is the reincarnation of the classic arcade fighter, and will be a blast to play for anyone remotely familiar with the game or genre. Street Fighter IV for the iPhone sells for $9.99 and is worth every penny.