Square Enix has brought its most prized possession and critically acclaimed classic RPG game, FINAL FANTASY to the iPhone and iPod touch. Sit back, relax and have some fun with your iPhone playing Final Fantasy. The game was already released for NES and other handhelds such as the Nintendo DS and Gameboy Advance and PSP, and now the iPhone and iPod touch version of Final Fantasy is here, with slightly improved graphics, simple gameplay and its original symphonic soundtrack.

Final Fantasy at its core is centered around deeply developed characters, twisted storyline, and addictive gameplay which is what made it into a successful franchise. If you are not familiar with the game, you pick and setup 4 characters, picking from the six provided and giving them a name: Warrior, Thief, Monk, White Mage, Black Mage, Red Mage. Travel the map of the world looking for four crystals that will help the king save the world from evil knight Garland. Battles are done in classic RPG format, you equip your characters with various weapons and shields, pick your weapons and instruct your guys to attack. You can also flee, defend, or expel magic potions. The iPhone version of Final Fantasy uses a nice large onscreen D-pad for movements around the map and a speed boost button on the right. The fonts are basic as always and some users have reported crashing although we never faced this problem during our playing. 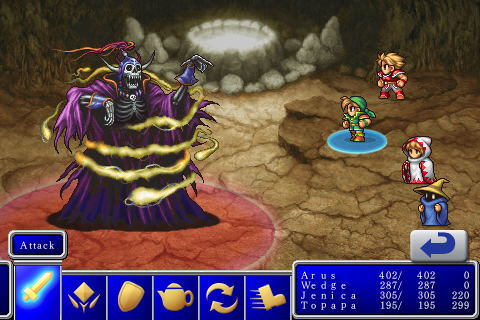 The current version of the game does not rotate gracefully when you rotate the iPhone, a feature that is sorely missed, especially for those who prefer to have the home button on the left while playing. Another missing piece is the lack of any type of tutorial or manual, which would have been great for those who have not played this game before, and would probably be lost trying to figure out what to do. With some reworking of the sprite based graphics and gameplay, this game could potentially be more inline with other RPG games for the iPhone by taking full advantage of the powerful iPhone processor. Although this is only the first episode which does a great job of delivering the classic feel of the game to the iPhone. Perhaps Square will make enhancements in future episodes to take things to the next level.

If you are a die hard fan of the FF series, this is a no brainer that will have you nostalgic in no time. The price is set at $8.99 and there is no word yet as to when it might drop, but keep in mind that the same game on other consoles will cost you upwards of $20 and lacks the updated graphics. Overall a great first release by Square.