“What? I have to follow another long tutorial just to play a game? Ugh…I don’t have time for that.” If you’re thinking along those lines, then you should look into ReignDesign’s new platform game: Pig Rush. It is perfect for those who just want a pick-up-and-play game. The game features an adorable little pig named Jumpy who you help to run away from the farm. During Jumpy’s getaway, you guide him past different obstacles like large gaps and cute (but deadly) fires as the screen moves.

To help Jumpy jump you’ll tap low or high on the iPhone or Touch screen to make him leap high or low. Tapping the screen twice in a row makes him jump twice. Make sure you hit the bees–where other players received their highest scores–to gain bonus points. Don’t forget to grab the fire helmet so you don’t die if you run into the fire! There is also a power-up after level six which transforms Jumpy into a SUPERSIZED pig capable of stomping out fires and gliding across platform gaps.

Another nifty feature is that Pig Rush allows users to submit their high scores online and show off their great gaming abilities. Local high scores and global daily, weekly, and all-time high scores are available. My favorite feature, however, is the secret game you can unlock at the start page. If you shake your iPhone or Touch slightly for 20-30 seconds, the screen will show snowflakes and a jingle soundtrack will start. When you select start, you’ll see a Christmas version of Pig Rush called “Reindeer Rush” featuring a reindeer instead of Jumpy and a Christmas-themed background. 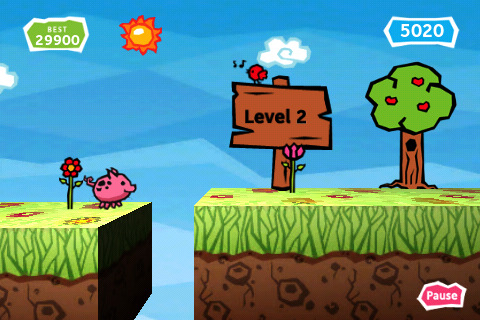 It’s a great, kid-friendly game rated for players aged 4+. Although a kid could play the game, adults will also enjoy the great graphics and soundtrack–reminiscent of classic games like Donkey Kong. Unlike its retro elders, the screen in Pig Rush doesn’t appear completely flat, but 2.5D (notice the platforms). Pig Rush’s soundtrack is also relaxing and lends to the additive quality of the game. I only wish I had more lives so I could advance to higher levels sooner and not have to restart the game all over again (psst.. I hope you’re reading this developers!).

Pig Rush is fun for the entire family, or you can keep it all to yourself. It is a must buy for those who love platform games. And for casual gamers who just want to try it out, it will only cost you $0.99 and provide you with hours of entertainment. That’s a fantastic value in today’s economy.