Did you receive yet another rejection letter? Were you recently dumped? Or did you have a tiff that you just can’t let go? All those pent-up feelings have to be redirected somewhere. And more likely than not, you can’t direct them at the person who caused them in the first place. Happynin Games’ accelerometer game, fowlplay, won’t help you get back at said person but it will help you release your frustrations.

Engage in some highly addictive “foul” play and deliver poop on unsuspecting people whilst flying a pigeon over a park. Start busting your stress with fowlplay’s simple and straightforward instructions: tilt your device to steer and tap the screen to poop. That’s it! Gain bonus points for flying toward the hot sauce icon when it appears to power-up and rain fiery poop and turn people to a crisp. Get more bonus points by delivering combo poops after hitting a taco, and bulldoze through trees after grabbing the helmet. Just remember to stay clear of the trees if you’re without a helmet or you’ll die! And the longer you stay in the game, the harder the game becomes as more trees are added and rearranged. See the top left for your score, top right for combo hits, and bottom left for remaining lives. 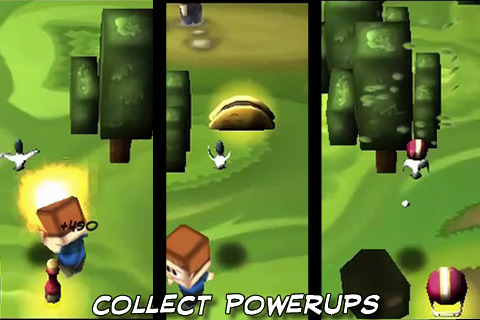 Fowlplay is fun to play because the graphics are mood lifting and colorful, albeit simple. The peope on the start page look like a cross between anime and South Park characters. The music and sound effects were a delight but they can also be turned off for those who believe otherwise. Users can also elect to submit their scores to online leaderboards via Open Feint and compete with friends, family, and strangers worldwide. They can unlock achievements on Open Feint by delivering different combo hits and scoring high points on a single playthrough. Users can also join the forum and chat with other fowlplay players.

I could easily spend hours playing fowlplay on days where I just want a pick-up-and-play game or stress relief, but some users may get bored quickly because the game can become repetitive. The accelerometer feature can also be annoyingly slow and the controls are not sensitive enough to direct the pigeon over all the targets. Fowlplay could also use some more game modes, targets, and power-ups–all of which the developers promise to update in the coming months. Maybe more poop colors could be added? The pigeon should also eat half-eaten or partially eaten sandwiches, burgers, etc. instead of whole food items. Developers might also consider editing the pigeon image in the game. It looked more like a duck to me especially in combination with the pooping noise which sounds like a “quack”. And not to be nitpicky, but the phrase “time to engage in some ‘fowlplay'” is a little off. Pigeons don’t seem like they would fall into the fowl category.

As is, fowlplay is not a must-buy. However, if you have the $0.99 to spend the pottyhumor is worth it.