Sudoku and speed enthusiasts, rejoice: now you can have both in one game! Andy Wise’s new iPhone game, Numbl, is a fun math workout that involves addition…with a timer. Just tap enough the numbers on the tiles to add up to the number at the top of the screen. Each tile used correctly will disappear; your goal is to clear the entire screen.

You can compare your scores on the world-wide leaderboard, post them on Facebook or Twitter, or (my personal favorite) play against a friend in the 2-player version of the game. Each of you will face off by taking the opposite side and playing Numbl as fast and accurately as you can. 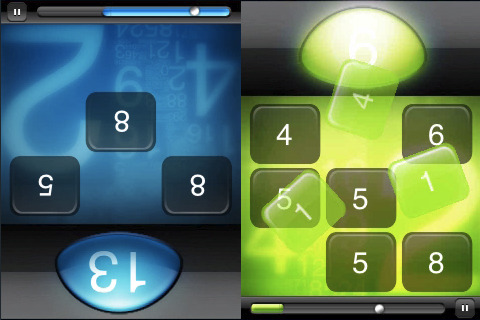 One wouldn’t expect a game of basic addition to be so engaging, but with the addition of a timer, Numbl fast becomes an addiction as you try to defeat yourself or others. The fantastically designed layout is just a cherry on top of a delicious cake. It’s fun, it’s a workout for the brain (and trust me, those simple arithmetic skills do atrophy once you’re out of grade school), and it’s only $1.99 for endless hours of both.