In the 80s, Simon revolutionized the way we viewed memory skill games and for the touch screen era of today, I could see White Lines doing the same. Crafted with a stunningly monochrome minimalist design and sleek gameplay, White Lines is an engaging memory game that caters to all players, being easy to play but increasingly challenging. Aimed at exercising your short-term memory, White Lines adds an extra challenge to the traditional memory games by incorporating a stroke-dependent element to the mix. Not only do you have to draw the line in the right spot, but you also must do it in the same direction as previously seen.

First, you will see a demonstration of the lines being drawn. Afterwards, you must copy the demonstration and draw the lines exactly as they were drawn before. If you mess up, you have two chances in the entire game to try again. After that, it’s game over. 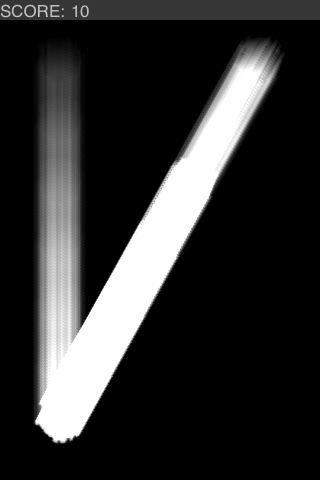 The game has five increasingly difficult levels starting from ‘Easy,’ which has two strokes to memorize and finishing with ‘Are You Nuts?,’ which has six. There is OpenFeint functionality but aside from being able to post and compare high scores, the game is pretty simple as it stands. Later updates allowing score bonuses or tracking of speed and line accuracy would be welcome additions. There are also a few bugs that sometimes causing the game to freeze or crash that will hopefully be remedied soon.

Nonetheless, White Lines works really well on the iPhone platform and is a novel reinterpretation of memory games as we traditionally understood them to be. With its smooth gameplay and great replay value, White Lines could unsurprisingly turn out to be one of those games that ends up earning one of the treasured spots on those first two iPhone pages. You can find White Lines in the AppStore for $0.99.