Here’s an adorable take on the all too-familiar genre of physics-based gaming. Brain-paralyzingly cute, Bridge Odyssey is set on several islands where your goal is to help the helpless little shadow animals free their friends and safety cross the giant chasms by building structurally-sound bridges over them. And if their sad, little eyes weren’t enough to send you on a bridge-building mission to save them, you’ll soon discover that their sad, little angel spirits floating from the ravines from which they fell will. 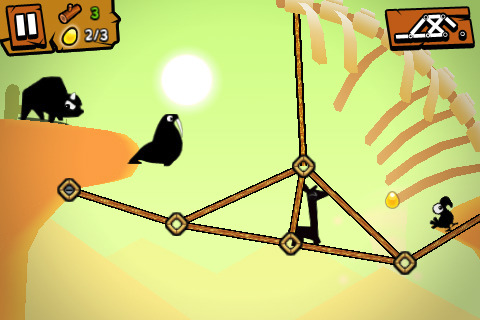 All joking aside, Bridge Odyssey is, in fact, a pretty novel departure from the typical aspects of physics-based gaming. Instead of having to roughly account for firepower or angles of trajectories, you’ll instead be roughly worrying about support beams and the maximum weight your structure can handle. Each level has a set limit of bamboo sticks you can build with and passing a level using two less than the required amount will earn you an achievement. Levels have one or more anchors that you start your bridge with and some levels will have support vines (add elasticity) or stalactites (drop down for extra anchor points). There are 8 bridges on each island and 6 unique islands, equaling 48 levels in total. While levels are engaging and do increase in difficulty, the game is rather easy to breeze through. Despite that, I found Bridge Odyssey to be really enjoyable while I was playing and because of this, I hope GameLoft has more plans for the game in the future.

A really awesome addition to the game would be a level creator/editor. For one, it’d be fun to see all the different kinds of bridges you could possibly come up with and the ability to share and play user-created levels could also be a great way to remedy the fact that the game’s included levels are so easy to beat. Given the already fantastic art and polished design of the game, I could easily see this addition opening the game up to a much larger audience.

But Bridge Odyssey is already a solid game the way it is now and with its background music and sound effects as finely delivered as its concept and graphic design, Bridge Odyssey is well-worth every one of the 99 cents it costs in the AppStore. If you’re still hesitant, you can try it free first and see for yourself with Bridge Odyssey FREE.