Those who have played the PS2 version of Katamari Damacy will be delighted to know that a version of the game has now been ported to the iPhone, renamed i Love Katamari. The same basic rules and storyline are preserved, as well as the original look of the game.

For those not in the know, the funny little green creature is actually a prince, whose father–the King of All Cosmos, mind you–actually destroyed celestial bodies during a drinking binge. The little Prince is charged with the task of recreating the stars with a “katamari”: a magical adhesive ball that allows smaller objects to stick to it. The magical part of it is that the stuck objects that become part of the katamari become sticky as well, allowing the ball to grow and grow. So, while you’re starting with objects like dice, you can soon work up to cats and boots and mountains (remember, the Prince is only 10 cm tall). When the katamari reaches a certain size, it can become a star.

In the iPhone version, however, you have four game modes to play: Story Mode, Time Attack Mode, Exact Size Challenge Mode, and Eternal Mode. In Story Mode, you must roll up items that the King requests; Time Attack has you making the largest katamari possible in an allotted amount of time. Eternal Mode has neither time nor size contraints. There are five stages in which you play these modes, four of which are locked until you clear the previous mode. To roll the katamari, simply tilt the iPhone. All four directions are used, and you can also tap the left and right sides of the screen to move. A helpful button is the Quick Turn button down at the bottom of the playing screen, as it allows you to turn 180 degrees. Tapping the katamari once will slow it down, but tapping it quickly in succession will quicken the pace. 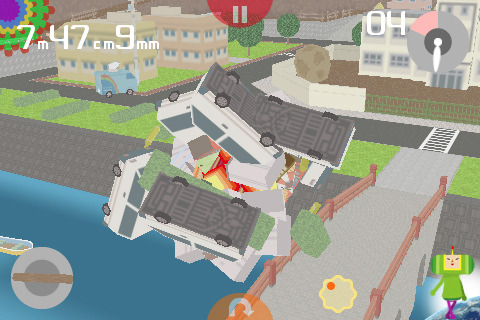 The controls are highly intuitive and the physics are great (watching the Prince climb up and slide down the kotatsu tickles me), which helps make the gameplay excellent. You only need a few seconds in order to get the hang of the game. What can take longer, however, is figuring out exactly what you’re supposed to do if you’re not familiar with the game. There is no backstory included, so the reason for rolling around and sticking to things is relatively obscure (of course, the reason is weird enough to be obscure, anyway). What this game app does have going for it, though, is a Yes/No option for every single button you tap; never again will you have to backtrack after tapping the wrong button in haste. i Love Katamari is a dizzying sort of fun time, and bizarre enough to be delightfully entertaining. Even the soundtrack and sound effects–full of futuristic beeps and boops–are oddly amusing. Roll on and snatch this game up for $4.99 today!