An old school, side-scrolling, action game, TEDD hearkens back to a simpler time, when two buttons were really all you needed to bring a shadowy crimelord to pixelated justice. The action is very similar to Golden Axe or the Streets of Rage. In fact, I found it a little too similar. I’m pretty sure most of the action and sounds are deliberate rip—-excuse me, “homages” to Streets of Rage.

Truthfully, I really wanted to like this game. The art is very cute, in a generic anime fashion, and the graphics are a gorgeous update from the pixelated sprites I remember from my childhood. You are some random dude, an expert fighter with a spunky female sidekick. Together, you roam the streets, fighting gang members and ridding the world of evil. Or something. It doesn’t really matter all that much, since the game’s poor command of English makes pretty much all dialogue inadvertently hilarious (“First clean them and Find your necklace”), and the narrative is basically meaningless. You’re just there to bust some heads. 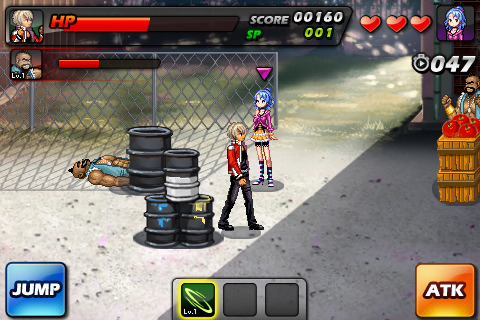 If you’ve ever played any retro beat ’em up, the fighting will seem familiar to you. There are two buttons, Jump and Attack, and a few special attacks that you can build up with experience points. The main difference is that TEDD has no D-pad. I’m generally not a fan of virtual buttons, and I know there’s limited real estate on the iPhone, but this is a pretty glaring omission for a retro side-scroller. To move, you have to target the enemy by tapping them. Assuming you haven’t pushed any other buttons, your guy will run over, whereupon you can commence kicking him in the face. The problem with this is that there are multiple bad guys coming from all different directions, and it’s hard to make rapid adjustments with so many moving targets. The controls lag, and more often than not, I found myself futilely punching the air, half a step away from a bad guy, while my spunky sidekick took a beating. D-pad, please.

The sidekick AI is generally decent, but she has markedly weaker attacks and it can be a grind to keep her alive. There’s usually plenty of health items around for you, but there’s no way to force a health banana down your sidekick’s throat when the going gets tough.

Even though it’s highly derivative, this could have been a really fun and (accidentally) funny game, if only it had a D-pad. As it stands, the game looks great, but actually trying to play is pretty frustrating. Still, for the introductory price of $.99, it’s definitely worth a look.