It’s a cold and rainy night, and the office is as quiet as a dead man’s whisper. Unpaid bills are piling up, and that fedora has definitely seen better days. You can barely manage to feed your goldfish, and the phone hasn’t rung in weeks. Just another day in the life of hardboiled detective, Nick Chase.

It’s tough being a private detective, and it’s even harder bringing a decent detective game for the iPhone, but Gestalt Games makes a reasonable attempt. You solve a wide variety of puzzles (mostly hidden object, but also things like jigsaw and slide puzzles) to guide Nick through the seedy underworld, looking to unravel the mystery of the missing manuscript.

The puzzles are fairly substantial and challenging, occasionally even a little too challenging. More than once I found myself scratching my head, clueless as to what the next step should be. You can use their “bullet” hint system to help you find missing objects, and there are plenty of spare bullets to be found throughout the game, in case you need to reload your hint gun, but not all puzzles allow hints. You can almost always skip puzzles if you get really stuck, but I found it really frustrating when I couldn’t get a hint and was forced to skip instead of finishing the puzzle. All the same, I was glad the skip option was there, since I just could not solve some of the puzzles, even after it seemed like I’d figured out what I was supposed to do. 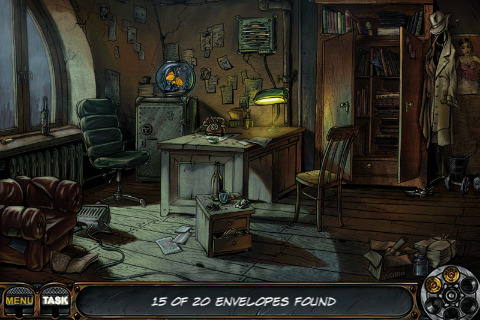 Production values are very high for this puzzle-based adventure, but the interface has some sensitivity issues. Often you’ll stab repeatedly at the same spot, hoping that eventually you’ll pick up the object you want, and it can be a tedious challenge to get through certain puzzles. The graphics, however, are gorgeously gritty, with cut scenes done in a swank, comic book-noir style. This is definitely a game where you want the sound on, and they even tell you this in the beginning. There’s a ton of generally solid voice work, and Nick Chase’s running commentary sounds like a combination of Bogey and Christian Bale’s Batman.

I liked the game, but it did feel a little awkward as an iPhone port. Definitely there’s a lot of substance here, and I would be glad to see more games of this type available, but more attention needs to be placed on making the touch controls seamless when porting the game from the computer version. All the same, if you’re into gritty detective fiction and casual games, you can’t go wrong with Nick Chase.

Here is a video demo of the Nick Chase: A Detective Story app on the iPhone