I think I finally understand the meaning of the phrase “going postal”, and this game is what finally hammered it home. A time-management game that requires you to manipulate conveyor belts so packages reach their appropriate destination, Postal Mayhem is one of those games that starts off promisingly enough, but by the end, you’re left swearing at the screen and feeling homicidal towards the notion of mail service all together.

The game is just fiendishly difficult. If the screen were bigger, it might not have been so tough, but it was really hard to see which package was which, and when you’re working under time pressure, things quickly go from bad to worse. Trying to differentiate between a light gray envelope and a light brown one on the fly is downright maddening. In general, the graphics are nice, if a little bland, and the sorting mechanism worked fine, but the packages need much more obvious design differences if the developers expect people to play this game without going blind. 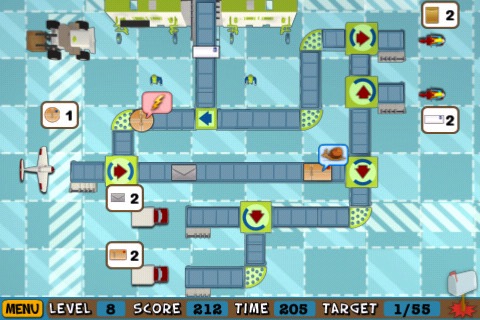 Additionally, having a few different difficulty ratings might have helped. I quickly went from, “Oh, okay, I get it. This is kinda fun,” to “OMG, where did that come from?! No, not that one! Ahhh!!!” and I’m usually not so bad at time management games. Again, the small size of the screen is a big factor in this. When you’re frantically trying to adjust several conveyor belts all at once, you really need all the wiggle room you can get, and there just isn’t a lot of it in Postal Mayhem.

A smaller annoyance, but a very obvious one, is the sound quality. The background music buzzes like a cheap synthesizer, and it has a tendency to cut out between levels. I hated the music enough to just keep it off permanently.

If you’re a die hard fan of conveyor belt games, these considerations might not be enough to turn you off of Postal Mayhem, but if you’re just a casual fan in search of a fun game, save yourself the frustration and return this one to sender.