Since I was about 2 when Thrust for the BBC Micro was originally released in 1986, I don’t recall it particularly well. I’m likely too young to be properly swept up by the nostalgia of classic games that apps like GravSpace seek to capture, but that doesn’t stop me from appreciating the games from a fresh perspective and in a new medium.

Not having the finely honed skills of a classic gamer, GravSpace was definitely on the challenging side for me. Using a combination of the accelerometer and touch controls, you are called upon to pilot a lone spacecraft deep into alien planets to retrieve spherical energy pods. Along the way, various laser or energy cannons are being fired at you, and you’re flying with a limited amount of fuel, forcing you to make dangerous pit stops at refueling stations along the way. It’s the kind of hazardous mission that, if left in the hands of lesser mortals, would be absolute suicide, and, I confess, an embarrassingly large number of my ships ended in spectacular crashes. 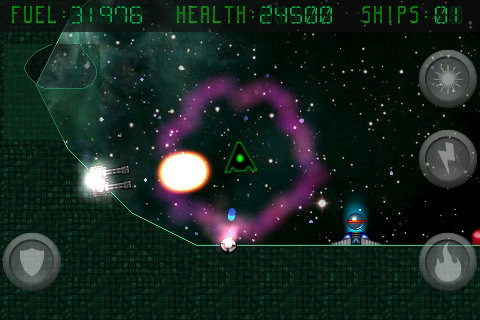 One thing to note, because GravSpace definitely recreates the feel of a retro game, it is HARD. Despite my tender age, this wasn’t my first rodeo, and getting more than a handful of levels in before exploding on the side of a wall was really tough. Steering is controlled by tilting, and on-screen buttons control the thrust, shield, lasers, and a plasma device that destroys immediately adjacent enemies. You can adjust the controls and sensitivity to your liking, and with a few minor exceptions, the game handles well. Small issues, like the main menu skipping upon first load, still need to be addressed, but the game is, by and large, a thoroughly respectable piece of work.

GravSpace definitely doesn’t win any originality points, but it has a few nice touches here and there. I especially appreciated the graphics update. Despite being a retro-style game, the graphics are much sleeker than the original 8-bit inspiration, and the backgrounds, in particular, are quite nice: gorgeous, glittering, blue-black fields of stars.

If you like classic games, then you’ll appreciate what GravSpace has to offer, especially the price. If you’ve never played an old-school game like Thrust or Gravity Force, but you’re curious, this is a nice starting point, just be prepared to explode a lot. No, really, A LOT.