Ordinarily I hate it when a game tries to blur the line between game and art, because it usually results in a really terrible game, but Auditorium is a gorgeous exception to this. Having now played several inferior clones, it’s not hard to see why the original is still the best. Auditorium is one of a kind, a new classic that pushes the medium further.

The game play is very simple. You have a stream of light they call “The Flow” and an “audio container” you want to fill with it. On the screen, there are a number of movable buttons that you can place to twist or bend the light in a particular way until you’ve reached your target. You can also expand and contract the buttons’ area of effect by pinching. When touched by the light, the containers play music. Simple as that. 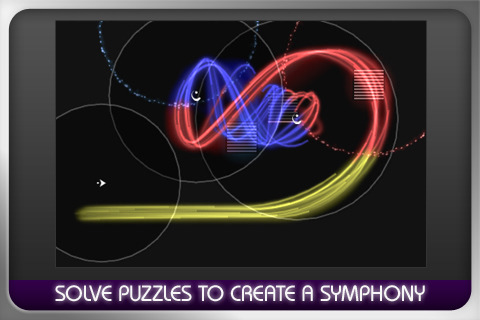 Later levels introduce additional complications, like different colors, but the interface is so intuitive that you don’t really need any instruction. Indeed, the game doesn’t even come with a tutorial, and you’d never feel the lack.

Instead, you’ll be too busy feeling delighted and engaged by the elegant puzzles and beautiful audio-visual feast the game offers. The music is especially satisfying, with individual tracks that sound gorgeous by themselves, but also combine into a magnificently lush orchestral swell as levels become more complicated.

The visual design is deliberately spare–a plain black screen cut across with a spray of luminous particles–and it’s used to great effect. As levels become more complicated, the more beautiful Auditorium becomes, swirling and bending into a shimmering sculpture of light, color, and sound. If I sound a little starry-eyed, it’s because the game is just that beautiful.

If you haven’t done so already, do yourself a favor and grab the Lite version and try a few levels. Or better yet, just get the full version. If you love music and games at all, you won’t regret it.