If you’re looking for a quick, physics-based game to pick up, look no further than Joshua Levine’s Chain Link Pro. It’s easy to learn and easy to play, but with a multitude of options and levels that will keep you glued to the screen. All you really need to do is connect objects with the same shape together: this is done by tapping and holding onto a shape and dragging it to collide with another of the same shape. Chains follow the movement of your finger, such as how fast or slow you’re dragging them. Keep up the colliding to create a chain of like objects, and then drag them to the center vortex to score. The longer the chain, the higher the score. However, longer chains also mean a higher risk of collisions with other shapes, which will disintegrate the chain and cause you to lose a life (or the game, if in Arcade mode). 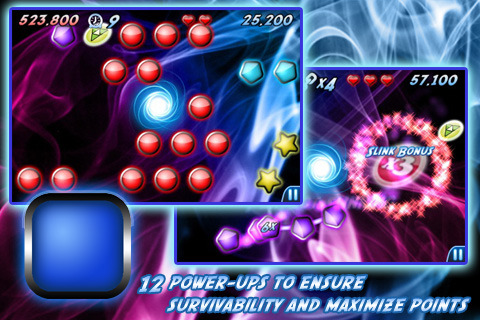 Among the options are three game modes: Arcade (avoid collisions), Timed (race against the clock), and Static (non-moving shapes). The Timed game mode allows for earning more time by scoring points; collisions here will subtract from your total. All the objects fly in and move around in all the game modes except Static, which also gives you three lives. There are also Easy, Medium, and Hard modes for difficulty; a special Hardcore mode is offered to people who have mastered the art of chaining.

Along with the different objects and shapes, there are also 12 power-ups and Quests floating around. They are collected or activated in the same way as other objects: you collide with them with your chain. Power-ups can include options such as chain invincibility and metamorphosis. The Quest objects give you a goal to complete, allowing you to earn extra points and unlock power-ups; descriptions of all of them can be found under the Quests screen from your main menu. You can also earn bonus points if you can make chains especially quick (Speedster), score repeatedly with the same type of chain (Repeater), or flick an object or shape into the vortex from an especially far distance (Traveler)

For a game that only utilizes one finger, Chain Link Pro is ridiculously fun and addictive. The fluid movements of the chains are a marvel to watch, and the physics are excellently rendered–just try bouncing objects off the walls and into the vortex, you’ll see. Not only does it move well, but it is also very pretty to look at. Everything glows, whether in warning or in triumph. (There’s even an option to change the theme of the game.) Chain Link Pro is sort of like a highly upgraded idea baby of Snake, and all together, the graphics, design, and physics make it seem as if you were dragging things around in space, while underwater. The soundtrack is a bit spare, but there is an option to play your own music. Chain Link Pro is now on sale for a short time, so do yourself a favor and grab this game for only $0.99 before it heads into a vortex.