Do you love the rush you get when you set the pinball and launch it from it’s spot? If you’re like me, you want to get daily fix of pinball. OOO Gameprom’s new release, The Deep Pinball, is a wonderful take on classic pinball games. It is a beautiful machine and offers a gameplay experience worthy of your time.

The machine looks like classic pinball machines. There is a launch area, right flipper, and left flipper. You launch the ball by dragging your finger down and releasing in the lower right hand side. Then you’ll control the left and right flippers by tapping anywhere near the bottom of the screen with your left and right finger, respectively, to prevent the ball from falling through. You can toggle the camera mode from live and fixed to meet your viewing needs by simply pinching your fingers. Keep it on live mode when you want an up-close look at the beautiful detail in the game. You’ll also be able to adjust the settings for sound, music, and theme. 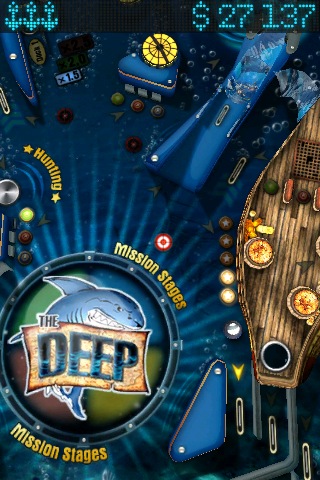 The Deep Pinball offers a great gaming experience. It comes with easy to follow instructions which you can access on the start page by swiping through the pinball news and load page. The 3D graphics are lovely and the pinball game itself is full of detail. You’ll see different underwater themed items on the machine like sunken ships, tunnels, treasure chests, sea creatures, and jewel-toned waters. The visuals are shiny and full of bells and whistles–almost like a slot machine. The sound track and sound effects are also great, but I could do without the strange robotic voice of the machine’s female attendant. You can mute her like I do by accessing the Settings on the iPhone. You’ll also be able to play with camera tilt and stereoscopic imaging feature. The physics are realistic and the tilt feature is a fantastic addition and allows you to the machine like you would a real pinball machine. The stereoscopic imaging feature will allow you to play with red-cyan, green-magenta, yellow-blue, or no special effects. Personally, I prefer no special imaging because the screen looks strange and everything appears doubled. It was hard to distinguish between the ball and the fake image, and I lost many balls when the stereoscopic imaging was turned on. The game can become a little repetitive, but most pinball games are that way.

Controls were also spot-on. Lag time was practically nonexistent between having my fingers touch the screen and having the flipper react. It was also easy to pause and resume the game. I just wish the autosave feature always worked. It was frustrating to see the game freeze at one point and just close when I was earning a high score. The game is relatively new and the developers are still working out some bugs so be patient if you decide to buy. I also appreciate the availability of local and world score tables. The game could build upon this area by adding an e-mail feature or integrating with social media clients like Facebook or Twitter. This would allow users to recommend the game to friends and family, and generate more sales for the company. You can tell that the developers care about their product. They have a website, promotion trailers, forums, and a tutorial. Although the written tutorial is great, I’d like to see a video tutorial for the game with more details about the different mission stages.

Overall, I would recommend this app for pinball fans or casual gamers. It is a solid little machine with a fair amount of detail. For $0.99, The Deep Pinball is a great buy.

This 3rd Party App is available at the Apple iTunes AppStore. Browse the full list of all AppStore apps filed under the AppStore category.
Download The Deep Pinball at iTunes App Store
Price: $0.99
Developer: Website
AppSafari review of The Deep Pinball was written by Linda Ta on April 10th, 2010 and categorized under App Store, Featured, Fun, Games, Physics Based. Page viewed 5309 times, 1 so far today. Need help on using these apps? Please read the Help Page.