I pity the foo’ who doesn’t recognize the inimitable style of Mr. T. You probably have to have been a child of the 80’s to fully appreciate the subtle nuances of his performances, but to the connoisseur there is nothing better. 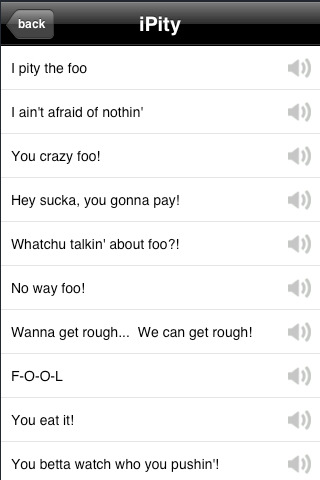 iPity rips Mr. T from his A-Team glory days and blasts him into the iPhone. It’s effectively a sound board, featuring nothing but a very rough animation of Mr. T’s face. Tap it, and you’ll be blessed with a random audio clip from the Mohawked One’s glory days. You might hear such gems as “Got no time fo’ da jibba jabba” or “Hey, man, I ain’t gettin’ on no airplane!” If you prefer, you can browse the library to find your favorite Mr. T quote and gorge on the master thespian to your heart’s content. It’s a truly awesome blast from the past for any kid who grew up on a steady diet of B.A. Baracus. Plus, it’s free!

Now, here’s the bad. Because it’s free, there’s an obnoxious ad banner that runs the entire time along the bottom, even obscuring a portion of Mr. T’s face. It doesn’t really interfere with any of your Mr. T playtime, but it’s definitely an intrusive and unwanted presence. From what I gathered from several iTunes’ comments, this used to be a paid app, but the developers added the ads and made it free without warning, understandably upsetting the folks who shelled out a buck. Not such a great move, developers. But for the rest of us cheapskates, their loss is our gain.

Unfortunately, aside from just the ugly ads, the audio files are also rather unfortunate from a quality control perspective. They are all of varying and often terrible quality, as though they were ripped from old VHS tapes, which, considering the subject matter, they very well may have been.

To be perfectly honest, it’s not a great app, but that really shouldn’t stop many of you. To say it is rough around the edges would likely be on the generous side, but, like Mr. T himself, that’s part of the appeal. It’s a crude, gritty, and silly app, and to a child of the 80’s or a casual Mr. T fan, this app represents a lot of good, cheap, and surprisingly clean fun. I can’t in good conscience give this a very high rating, but I would still whole-heartedly recommend it to the Alf and Punky Brewster set.