So…yeah, conversations can get a bit weird at my place. But I swear, that’s exactly what I was doing! Alien VS Stickman is a quasi-tower defense game that has you destroying waves of spear-wielding stickmen by smacking them into oblivion with stringy nostril goo, courtesy of one gigantic, pink, runny-nosed alien. Admittedly, the premise is kinda weird and gross-enough to unsettle my otherwise unflappable boyfriend, but it’s all in good, violence-filled, cartoon fun. 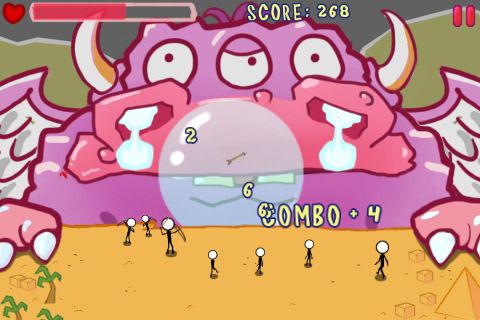 I liked the idea of the game a lot. It’s like a combination of tower defense, archery, and possibly whack-a-mole. You kill stickmen or snag bonus through carefully aimed snot shots. Slaughter enough stickmen and you can upgrade your alien to be a more efficient killing machine as you work through the levels. Tower defense games are fun, but often they come out looking all the same, so I appreciate it when someone comes along with a fresh innovation. That said, I’m not sure that this was the bright new change we were looking for.

I don’t know this for certain, but I feel like it’s a sign the combat system needs to be reworked if you feel compelled to specifically hint that it will be easier to aim if you turn the game upside down. For whatever reason, aiming snot is extremely difficult, and at some point, I got a handy hint telling me to turn the game upside down. That definitely helped my aim, but it’s still an utterly ridiculous suggestion. If they knew that made the game better, why didn’t they just orient the stupid game that way? That said, even upside down, the controls weren’t great, only adding to my mounting frustration at a mediocre game.

As you might expect from a stickman game, the graphics aren’t great. They’re not terrible, but they’re definitely not inspired. The stickmen feel, well, like stickmen. I had hoped for some more expressive stick designs, a la XKCD or some of the stick fighting games, but these stickmen felt bland and uninspired. The alien is also on the dull side, and I would have much preferred the upgrades make it more visibly dynamic.

In spite of a good idea, the game just isn’t that great. Controls are poorly executed and action gets repetitive. Toss in some forgettable characters and you have a game that is just so-so. I managed to catch the game during a free promotion, but I wouldn’t have paid full price for it, and I don’t recommend that you do either.