If you’ve ever played Doodle Jump or similar endless jump games, you know how they work: try to get as high as you can. In Bird Strike, you launch the delightfully expressive Gerald the Bird from a telephone wire and, using the accelerometer, try to grab rockets and avoid obstacles to have him reach stratospheric heights. 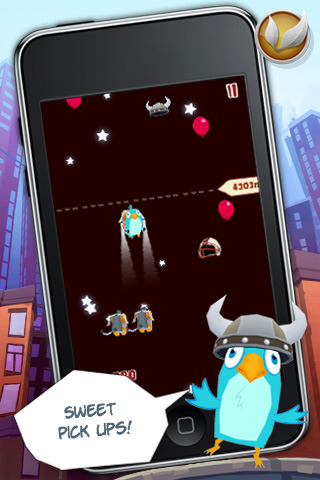 Now, usually it’s only going up that is the challenge, but Bird Strike goes one step further and adds an additional challenge to going down too. If you manage to get Gerald to the top of the level, he will be zapped by a UFO and become a hurtling meteor of bright burning bird. You must then use him to break stuff, namely, all of your former obstacles on the way down.

It’s such an obvious sort of addition, I’m kind of shocked I haven’t seen it before, but Bird Strike take a simple concept and delivers on it beautifully. It helps create level divisions in an otherwise highly repetitive game, and generally makes the game more playable, in my opinion. The various levels are also handsomely supported by some really excellently clean art direction, and I would worry if you’re not at least a little charmed by Gerald’s design. And if you feel fettered by the levels, there is also an Endless Climb for those of you who prefer a more straightforward challenge.

In terms of accelerometer control, I found it adequate enough that I assumed any steel girders Gerald’s head accidentally encountered were my own fault and not that of my iPhone. In addition to a personal scoreboard, there is also a worldwide leaderboard, and the game is Open Feint enabled, so sharing accomplishments among friends is trivially easy.

Now Bird Strike still suffers from the limitations of other endless jump games, mainly, that it gets repetitive and boring after awhile, but the overall package of Bird Strike is so bright and appealing, it will take you a long time to get tired of it. And if you do eventually get bored, just put it aside for a bit. You’ll like it all over again when you revisit it later, trust me. If Looney Tunes has taught me anything, it’s that cheerful cartoon violence never really gets old.