Tanks, trenches, and tough as nails soldiers–anyone can tell you that these are the things a war game is built on. Once somebody figured out explosions are a good way of getting male attention, the game industry was ready to milk it for all its worth. Arms Road Eastern Front is no exception to this tried and true model, but it doesn’t bring a whole lot else to the table.

A military-themed, quasi-tower defense-type game, Arms Road Eastern Front has you directing the frontline action from behind a line of barbed wire and trenches. You must strategically aim and fire your artillery at the approaching waves, being sure to match the appropriate weapon to the enemy. The effectiveness of a weapon is dictated by what kind of enemy it is (tank, soldiers, etc.), how far away they are, and what kind of upgrades you’ve given the weapon. Once the enemy breaks through your fences, you can only take on so many casualties before you lose the battle. 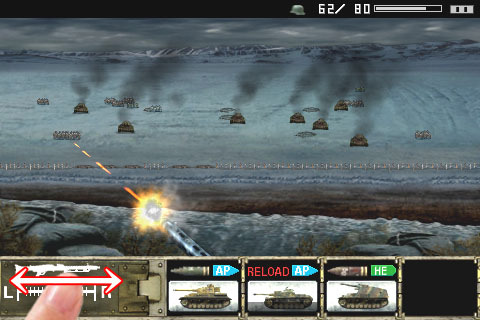 For the most part, you rely on the big guns for the battle, the heavy artillery which you have to aim and fire manually. The mechanism is very awkward and imprecise, so it’s very common to launch precious shells into nothing, and it takes a long time before you can fire again, so these misses can be costly. Your secondary line of defense is a machine gun turret that you can aim left and right with a swipe of your finger. The machine gun has unlimited ammo and will auto-fire once the enemy is close enough, but it still needs you to aim, a requirement made all the more awkward by poor control placement.

In fact, the entire control scheme is in desperate need of an adjustment. Trying to switch back and forth between all of the weapons is tedious and clumsy, and a very cramped and awkwardly translated help menu makes learning the basic controls an exercise in linguistic gymnastics. Not only was the font hard to read on its own, on at least one page, the developers had simply pasted the English instructions over the Japanese ones. Not exactly the most polished looking move I’ve ever seen.

The graphics and sound are also decidedly lackluster. Had the game done a good job of providing satisfying explosions and gun fire, I might have been more forgiving of the terrible control scheme, but the extremely dark and fuzzy graphics made everything look unforgivably bland.

If war is hell, a war game should be anything but dull, but Arms Road Eastern Front, practically crippled by a terrible control scheme, almost serves as an anti-war piece. There’s plenty of cultural awkwardness and terrible frustration, but very little glory.