Crazy Pirate Slots is a slot machine game app. by Clever Fox Software. You flick the lever on the right hand side down to spin the reels, and tap each reel to make it stop. If a skull appears on any of the reels, you have to quickly tap it to get “bonus booty”. If you fail to tap it, you lose some of your coins. You can also win bonus booty for landing on certain combinations- 3 of a kind, etc. There is also a red parrot that appears on the reels once in a while, and if you tap it in time, it will take you to a bonus spin game- kind of like pirate wheel of fortune. The wheel is comprised of skull, coin, and “spin again” pictures- coins add money to your bank, skulls subtract money, and obviously you get to have another try if you hit spin again. You can raise or lower your bet by tapping the + or – signs on the left hand side of the reels, and you can see which combinations yield which payouts by tapping the “odds” scroll on the bottom left of the slot screen. 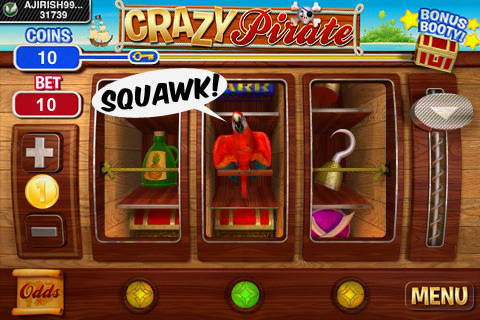 My favorite thing about the game (besides that I get to “gamble” any time I want) is the sound effects. When you don’t hit any combination(s) on the reels, a pirate’s voice says taunting things like: “You belong on the poop deck,” “Some pirate you are,” and “Yo-ho-DOH!”. When you do well, you get pirate praise: “”Ahoy,” “Show me the money,” and “Onward, me bucko”. The lever makes a spring sound every time you pull it, and when you win coins, it’s accompanied by a chime sound. If you miss tapping a skull on the reels or hit a skull on the wheel, the game makes a fart sound, which I found hilarious. There is no music while playing the slot portion of the game, but there is some cute island music in the background of the wheel mini-game.

The app. has a how to play screen, allows you to tell a friend, change settings, give feedback, join the fan club, and use Open Feint. I don’t know that it needs much more than that. The only thing that I’d like to see is more mini-games embedded in the app.- it would be more fun if you didn’t know what type of game you were going to see when you tap the parrot.

The app. is $0.99, and I’d say it’s worth it. I’ve been playing it every time I have a few minutes to spare while I’m on campus. Crazy Pirate Slots will scratch your gambling itch and put a smile on your face. Have fun, matey.