If you’re a hardcore puzzle fan, you know who you are. You’re the kind of person who can’t go to sleep at night until you’ve figured out the answer. You stay up hours trying new combinations, so locked in concentration that the casual observer would think you were mildly masochistic. You might even get so frustrated that you scream, but somehow it’s still all worth it for when you finally get it and your soul is at peace, at least until the next unsolvable level.

Theseus was designed for you, my friend. It’s a deceptively simple and addictive puzzle game that is sure to drive you crazy the longer you play it, but in a good way. Founded on that truly classic puzzle, the Labyrinth, Theseus pits you against the Minotaur in a mind-bending series of strategy puzzles. 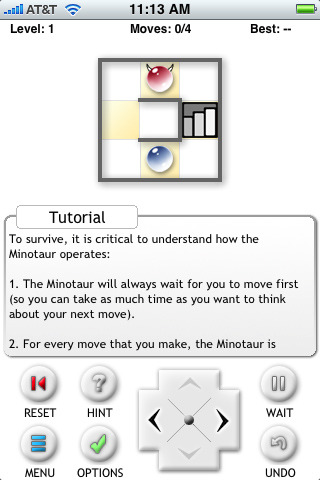 You, Theseus, can move one square at a time, but the Minotaur, your horned enemy, can move two, and he will always try to get closer to kill you. Lucky for you, the Minotaur is kind of dumb, so he will also always try to move horizontally before moving vertically, which means you can take advantage of the various wall configurations in the different levels. Set it up just right, and the Minotaur will be stuck smashing his stupid horned head into a wall while you sneak down the stairs.

Make no mistake, this is a very challenging game, but for the right kind of mind, it’s an extraordinarily satisfying one. You can take as much time as you want to contemplate each move, but you’d better be able to think strategically if you don’t want to get killed. Although, getting killed isn’t really that big a deal, since you can easily undo your last move and try again. There’s no penalty for dying, since this is a game that encourages you to learn from your mistakes.

The design sensibilities are decidedly minimalist, but they have a clean charm that doesn’t distract from the often brain-melting challenges of the Labyrinth. The interface is very easy to use, and the tutorial is short, but blessedly clear and easy to understand. In truth, for such a simple game, Theseus has really phenomenal production values.

This is definitely an app made for puzzlers. There aren’t a lot of bells and whistles, and those with limited patience need not apply, but for those who enjoy a good head scratcher, this is one of those easy to learn, hard to master games that will keep you satisfyingly occupied for hours and hours.