IMO: The World of Magic review

IMO has proven pretty definitively that I should never, ever, ever play World of Warcraft. For the past week or so, just about every single spare moment I’ve had has been dedicated to IMO, and now I’m ready to share an in-depth look at the fruits of my intense level-grinding sessions with you, gentle readers.

First up, this is a fully functional and legitimate Massively Multiplayer Online RPG (MMORPG) for your pocket. You can customize your character and choose from three classes: warrior, ranger, or magician. Pick a server and a faction, and then get ready to play. Once in, you’ll discover a large and engaging world, complete with plenty of missions, a comprehensive crafting system, a fully fledged economy, and a bustling community.

IMO is, in fact, a port of a popular Korean mobile MMORPG from 1996, so while there is a considerable amount of content immediately available, it does look older. The graphics have not been updated or optimized for the iPhone, so you have the characteristically cutesy 2-D sprites, along with a lousy frame rate and jerky animations, but it’s really not that bad. 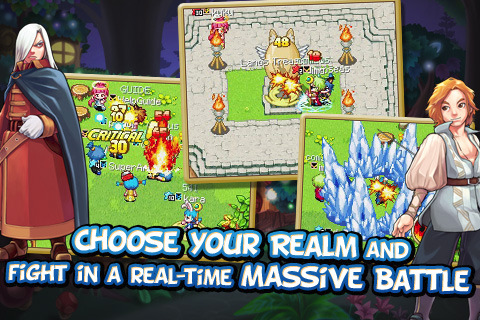 A little less exciting, although a good sign for the future of the game, are the gads of people already packed into the three available servers. This can be a little overwhelming at times, especially for new players, but the crowds shouldn’t really surprise anyone, since IMO is working off of the controversial “freemium” model, meaning it is entirely free to download, with optional in-game purchases to be made at your discretion.

Ordinarily I’m not a big fan of freemium games, since the free versions are often rather crippled without the pay content, but IMO is exceptional generous to its free players. As of right now, the game is almost entirely open to free players, with no level caps or experience restrictions. There are a few ads that pop-up here and there, and they are a bit annoying and sometimes buggy, but they’re certainly not a huge impediment to play.

This is not to say that the paid content isn’t worth it. To become a premium member, there is a “Starter’s Pack” [sic] available for $2.99 that gives you access to the two trading houses in the game, a bag that is difficult to obtain in-game, a fun hat (I got a pair of underwear for my head!), and a number of single-use items that would be otherwise unobtainable or expensive to buy.

The trading houses are very useful, since they’re the only way of buying and selling rarer items without resorting to standing in the middle of town and obnoxiously hawking your wares through chat. You don’t have an unlimited inventory, so larger bags are a hot commodity, as are the hats, which are difficult to obtain otherwise. The single-use items include things like scrolls to transport you back to your village or your friends directly to you. There was also a set of scrolls that let you shout across all servers, which I found a little odd, but for the most part, the items were really handy luxuries to have, especially during the epic grinding sessions IMO requires.

If you’re not a fan of level-grinding, I have bad news for you, because IMO is effectively one long grind. You can choose to solo or party, but either way, gaining experience is going to be slow and repetitive. If you can make peace with that, then it’s very easy to solo through the game, but the large crowds mean you spend a lot of time trying to chase down enemies that haven’t already been engaged. The combat system actually functions remarkably well, given the limitations of the iPhone, but the lack of physical buttons is always going to be irritating, and the game is still buggy, so your prey may up and vanish on you from time to time.

Because the game is faction-based, there is also PvP combat available in certain areas, including a massive organized battle every two hours. I find the individual PvP combat to be a little bewildering, since it it’s well nigh impossible to tell who is or isn’t on your side, but the massive castle battles are a lot of chaotic fun.

In fact, even with all the level-grinding, I’ve found most of the game pretty fun. The graphics aren’t stellar, and it’s a little on the slow side, but it’s been a very rich and engaging experience. The game definitely needs much, much better documentation, since the learning curve is exceptionally steep for new players, but once you get the hang of things, IMO quickly becomes a fun and easy time sink. Think of it as WoW Lite, since it’s the kind of MMORPG you can actually play casually and still have a life.

If you’re a hardcore fan of MMORPGs, you’ll probably find IMO a little too much on the easy and grindy side, but if you’re into RPGs in general, or you’re just curious about this crazy IMO thing, you should definitely check this one out. It’s not perfect, but this is a rare chance to experience a fully fledged MMORPG for very cheap.

Here is a video demo of the IMO: The World of Magic app on the iPhone

4 Comments to “IMO: The World of Magic”