Attack of the Zombies review

Attack of the Zombies is a game app. by Johnny Velasco Daza where you are soldiers hired by citizens to stop an army of zombies. The citizens pay you for every zombie killed, but you have to use those funds to hire additional soldiers and more sophisticated artillery. You start out the first level with six soldiers, $150, and 30 health points. Every gun you supply the soldiers with takes $4 out of your account, and every additional soldier you put into the battlefield is $1. You drag the picture of the gun at the bottom of the screen to a soldier to arm him, and you drag the picture of the soldier (located next to the gun) into the field to add another zombie fighter to the force. You cannot, however, drag an existing soldier to a different location on the screen. You only have the option of where to place additional ones. Also, the soldiers (once armed) shoot on their own; you cannot control the amount that they fire or the speed in which they do it.

The graphics of the game itself are super simple- little tiny, almost stick figure like, soldiers and zombies set against a simple street design and the façade of buildings at the top of the screen. I was surprised by how simple the tiny soldiers and zombies were, because when you open the app., there is a title page with four ravenous, detailed zombies with blood around their mouths in a cloud of smoke with a large grey cityscape in the background. The title of the game is suddenly covered in blood spatter, accompanied by the sound of shot. The menu page has the app. features on a headstone, with an eerie cemetery behind it filled with yellowish mist. So after that entire cool graphic set up, why the lame little non-descript men and sad battle scene? 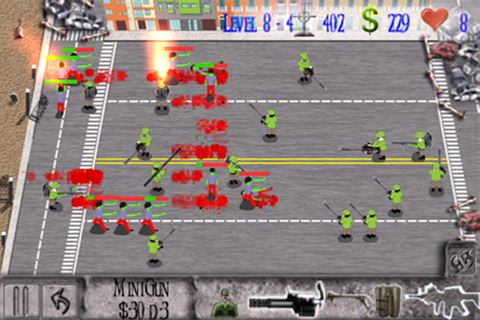 The only other features of the app. are a how to play section, an options section (for controlling sound and difficulty levels), and a history section that tells a short little story about how this zombie war got started in the first place.

I really don’t like that the soldiers can’t be moved and that their gun fire is automatic- it basically feels like I’m not playing a game at all, but overseeing one instead. I’m also not in love with the whole accounting aspect of the game- why not just have health levels or a certain number of lives? I don’t like budgeting for the better guns, either let me have them or don’t- and if you want to spread out the accessibility of the guns, maybe just make a new one available with each passed level.

I definitely wouldn’t pay $1.99 for Attack of the Zombies- it does not give the player enough control to make the experience enjoyable. Someone else will have to be responsible for killing the zombies, because I will be off playing a better (and cheaper) game.

This 3rd Party App is available at the Apple iTunes AppStore. Browse the full list of all AppStore apps filed under the AppStore category.
Download Attack of the Zombies at iTunes App Store
Price: $1.99
Developer: Website
AppSafari review of Attack of the Zombies was written by Tyne Kennedy on April 25th, 2010 and categorized under App Store, Fun, Games, Tower Defense. Page viewed 4308 times, 1 so far today. Need help on using these apps? Please read the Help Page.