Men garbed in black are intriguing, mysterious, and often irresistible. For instance, ninjas are men of mystery that have held the intrigue of many over the years. They’ve been depicted in films, starred as the protagonist in novels, and even been impersonated. So it makes sense that these men of mystery become the inspiration for a game. Why not? Oniric Games, creators of Silent Swords, have released a prequel, Silent Swords ZERO, to their beloved game about a cute but deadly Ninja.

ZERO may be a continuation to the installment, but it is an improvement on the original stealth action game. ZERO focuses on revealing the mystery behind the ninja’s origins and explains who he is, what he’s looking for, and the secret of the Silent Swords. In the game, you’ll play 25 different story levels and 3 different settings. Enjoy the 10 beautifully drawn, vibrant comic book pages while defeating your military enemies with various weapons like deadly swords and shuriken. Plan sneak attacks under the cover of snow or while hidden inside a vase. But be careful about who you destroy! Civilians have been recruited by the military, and the ninja’s honor code forbids slaying the innocent.

Controls for the game are relatively straightforward. You’ll use a slide bar to move the ninja left and right on the screen. There’s also a jump button you can tap to make the ninja leap in the air and jump from wall to wall. You can also deliver kills by swiping your finger across the screen in the depicted illustration to make the ninja swing his sword. If you want to take a break from destroying enemies, there’s a transparent pause button on the upper right hand corner of the screen. 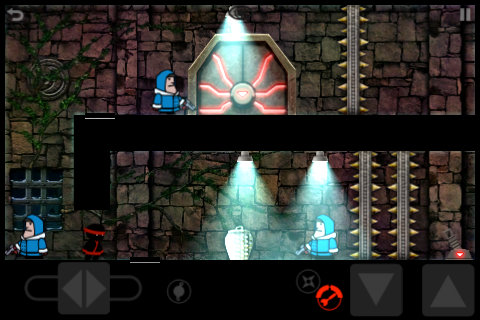 What really makes ZERO fun and addicting is the OpenFeint integration into the game. The availability of online leaderboards and achievements to unlock translates to many hours of play. ZERO also comes with extra levels you can unlock after you finish the main quest which is a nice touch.

ZERO also sports similar graphics and soundtrack to the original game. You’ll be able to appreciate the carefully detailed backgrounds, characters, and weapons. Developers really paid attention to the details on this game and it shows. You can see everything down to the soldier’s coat buttons. The animations itself also look smooth and polished. As for the audio, the soundtrack and sound effects only enhance the atmosphere and add to the gameplay experience. There’s no annoying short loop. There’s even different music for different levels.

Silent Swords Zero is well worth its $2.99 price tag. I can’t think of too many things developers could improve upon. Additional levels, weapons, backgrounds, characters, and challenges are always welcome. Hopefully they will be available. At the very least, additional levels should be added as the developers promised. A longer interactive tutorial would be another great addition. This game is a great overall value. If you’re not convinced, check out the nifty trailer.