WordMonger is a word game app. by Foundation42 LLC where your goal is to make words out of the letter tiles on the screen. You can make words in the same column or same row (going in any direction), but you cannot make words contained in multiple rows/columns. You can swap letters within the same row or same column by tapping a letter and then tapping the other tile (or empty space) that you want to swap it with. If you have formed a word and want to submit it, you swipe across the word (the tiles will turn green) and then tap the word to get points. Every so often, a “bonus word” will pop up at the bottom of the screen, and you can be awarded extra points if you can arrange and submit it before it disappears. I was never able to make one of these. There are also certain tiles that are worth more if you make a word with them, they say x2, x3, etc. next to them. 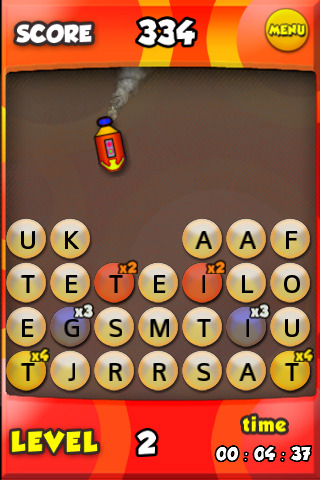 There are also hazards to contend with while you’re playing the game- sometimes tiles get locked so you can’t use them, there are missiles that get dropped, bombs that appear, an off screen archer that shoots tiles, and a bird who drops eggs. As far as I can tell though, the bird dropping eggs doesn’t really do anything except distract you. There aren’t only hazards, though- when you do submit a word, sparkles fly up off the word and a + appears with the number of points you received for the word next to it.

One thing that I really did not like was that if you get to a higher level than level 1 and then lose, you don’t start at the beginning of that level, but you go back to 1 again. So I got to level 3, lost, and had to start back at level 1 instead of at the beginning of level 3. However, when I was playing on level 3 and had to exit the app. for a minute and come back, I could still resume my level 3 play. Also, I wish the app. explained more clearly the consequences for the different hazards- after playing a while, I still couldn’t figure out what exactly every hazard did or how many points each cost me (if any).

The app. has a “How to Play” section, a High Scores log, and an Options section where you can adjust the music, sound fx, and enable/disable the tutorial. The tutorial automatically comes up the first time you open the “Play” section, but disables itself after that.

WordMonger is definitely an addicting and fun app.- I’m not sure if it has enough features or variability to charge $1.99 for it, but if you are a wordsmith, it’s probably worth it to you to have it in your repertoire.