In the past, I’ve complained about the pseudo-Chinese identity of computer mahjong, but to give the game its due, it can be pretty fun. Like solitaire, for much of the Western world, mahjong is one of those games where the gameplay is always the same and so mindlessly addictive you can sink hours and hours into it without caring much about any of the trimmings. Then you play something like Shanghai Mahjong and you wonder why you ever put up with lousy free versions in the past. Shanghai Mahjong is HD so the same app looks even better on your iPad without having to buy another version. 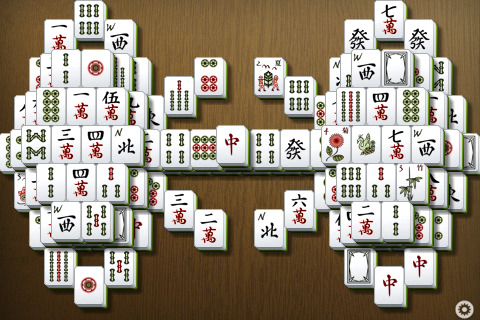 You’d be seriously hard-pressed to find a nicer looking mahjong app than Shanghai Mahjong. The basic graphics are perfectly adequate, but there is a ton of customization available, including a slew of freely downloadable options. You can choose from many different traditional tile sets or go crazy with things like fractals and Star Trek. This might make the game a little more approachable for people wary for the Chinese characters in the traditional sets, since you can also select tiles that sport the alphabet instead. There are also a number of different beautifully designed backgrounds to choose from and dozens of tile layouts, so it’s easy to find a style you’re happy with.

The gameplay is basically the same as any other mahjong game. You try to remove tiles in matching pairs until they’re all gone. Usually you can only remove them if they’re open on the left or the right (east or west), but Shanghai Mahjong also has a special “Windstorm” option, which changes the open orientation randomly each turn, meaning that tiles can sometimes be removed if their north or south side is exposed. I’m something of a purist, so I wasn’t wild about this setting, but it’s a reasonable twist for people who want to shake things up a bit.

The controls are generally quite responsive and intuitive, although the small screen size occasionally leads to accidentally selecting the wrong tile. If at any point you run out of matches, you have the option of starting the game over or shuffling the remaining tiles, but all games should be winnable from the start. There is also an undo button and a “find a pair” button if you get stuck.

There are some nice little sound effects when you’ve found a match or try to select an unavailable tile, but there is no music or option to play your own music. Personally, I prefer the quiet to the generic Asian music usually associated with these games, but some of you might miss it.

I’m not the biggest fan of these games, but I was really impressed by Shanghai Mahjong. It’s an extremely polished version of a generic, but much loved game, and I can see why its won over so many fans. Considering the game’s simplicity, the price is a little on the high side, but given that this is a game you can revisit over and over again, I’d say it’s still probably worth it for all the gorgeous extras you get. If you’re looking for a slower-paced puzzle game, it’s hard to go wrong with Shanghai Mahjong.