In light of recent events, Caou’s game app, Kovoclak, seems massively appropriate to review. Kovoclak was a (presumably mild-mannered) businessman who was dealt with a harsh blow when the pollution from irresponsible companies mutated him into a horned beast–at least, that’s how I interpreted the opening video…you might see it differently. Suffice to say, now you have to help Kovoclak navigate through different levels to clean up this huge mess (and probably change himself back).

After watching the lengthy but atmospheric introduction video, you go through a few interactive tutorials to teach you how to play this platformer game. Tap the right side of the screen to move Kovoclak forward, and the left to move him back; the stage is finished once he reaches the exit arrow on other side of the screen (it might be beyond the screen, so swipe your finger across the screen to peek forward). 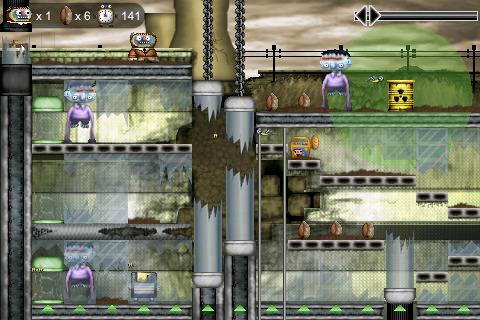 The ground Kovoclak walks across is separated into columns, each of which can be moved up and down individually (up to a certain point). Slide your finger on or above the column you want to move, and collect special items along the way; seeds give you extra life, floppy discs give you a save point, etc. Watch out for polluted areas and mutant attack bunnies (and other such obstacles)! There are 50 stages in 4 areas (factory, underground, oil right, and radiation zones), and all of them are timed (see the clock in the upper left corner). If you are touched by radiation or monsters, or run out of time before you finish the stage, you lose a life and must start the stage over.

Kovoclak sounds like a simple game, but also requires an earnest application of smarts and quick thinking. The multiple obstacles, movable platforms, and timed games combine to make the game a force to be reckoned with…too often the time ran out while I was still plotting my next move. The superb graphics and full soundtrack flesh out this excellent game even more, giving it a gritty, spookily desolate feel; the intro video itself is a work of art. Unfortunately, if you want to start the game from the beginning, there is no way to skip the intro vid and tutorials, which take up too much time if you’ve already gone through them once–the art is awesome, there’s no denying that, but a “skip” button here would be helpful. Other than that, as one of the most substantial platformers out there, Kovoclak is an app you must try.