Atari’s Pong was released 1970s–more than a decade before I was even born. I missed out on all the hoopla surrounding what a paddle and ball could do on a black-and-white screen. By the time I was old enough to appreciate Pong, it was nothing more than a nostalgic memory in the minds of fans. So when a rendition of Pong came out by Hype for Type, I was very intrigued. What could a retro resurgence possibly have to offer against all its highfalutin store friends?

Hype for Type’s TypePong is a modern take on the game with a cult following. The set-up of this one is a twist on the old game: it’s an up-down table arrangement instead of a right-left. The paddles look a little different too. Instead of having flat, white lines as paddles you’ll have the pleasure of playing with different type/lettering in your type tool kit. Yes, type, just like the name of the app promises. Play with all different sorts of randomly generated typography in an unlimited number of levels, and set your personal and world best scores. 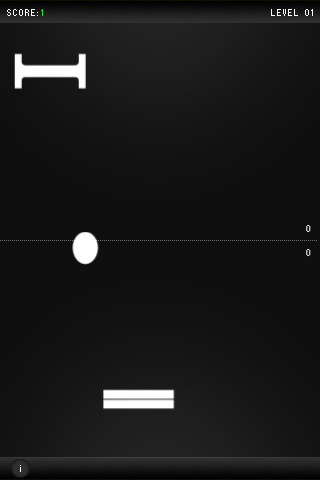 Give your little pointer finger a good stretch and get ready to pong. Don’t even bother with the instructions (not that there are any to begin with). Play against the built-in program or grab a buddy to join in on the fun. Although, in my experience, it’s a little hard to play with a friend on the small iPhone/iPod Touch screen. My advice? Get a little close and personal. First to five wins. Get used to the ping sound you’ll hear as you pong.

Overall, TypePong offers a fair gameplay experience. The game could still use a few tweaks. I’d appreciate it if I could pause during play. Five rounds is pretty short, but sometimes play just has to stop. Secondly, although it’s great that there’s a online global scoreboard, a local scoreboard would also be a great addition. Users want something they can aim towards and global leaders are just so darn good that it can be discouraging. Developers, I want a fightin’ chance. Finally, developers might try to make the game a little more interesting. I wouldn’t mind seeing options to change the white appearance of the paddles. Or perhaps the type paddles could change during the game to make things a little more challenging? It also wouldn’t hurt if the difficulty level could be adjusted.

At $0.99, TypePong will give you many more rounds than you’ll get with a few quarters at an arcade machine. It’s perfect for those who reminisce about the good ol’ days. Or those who are intrigued by this type of pick-up-and-play game. For most though, the repetitive play turns the game into more of a yawnfest. So if you’re into flash (like I’m prone to), then go ahead and pass on this one.

This 3rd Party App is available at the Apple iTunes AppStore. Browse the full list of all AppStore apps filed under the AppStore category.
Download TypePong at iTunes App Store
Price: $0.99
Developer: Website
AppSafari review of TypePong was written by Linda Ta on May 11th, 2010 and categorized under App Store, Art, Games, Strategy. Page viewed 3976 times, 1 so far today. Need help on using these apps? Please read the Help Page.