Space Traffic is a game app. by Renato Pessanha where your purpose is to collect points of light so your plants can grow large enough to enter the galaxy next door (the galaxy you are currently in is about to be destroyed). You start out as little blue planets, and each point of light you collect helps you move through the stages: blue-purple-fuchsia-red. You can only pass planets through the portal to the other (safe) galaxy if they are mature red planets. This collecting of light points is made more complicated by the fact that spaceships and comets occasionally fly across the screen, and also by the fact that if any of your planets run into another planet, one or both will be destroyed. Dropping off red planets in the other galaxy creates increasing numbers of new baby blue planets on the screen. It’s relatively easy to avoid the spaceships and comets, because you get a warning (in the form of a red blip at the side of the screen) as to which direction they are coming from. So, it’s the planets running into each other that is the real problem. To lead planets towards points of light (or away from an obstacle), just draw a line with your finger from the planet to wherever you want it to go. A dotted line will appear in the same color that the planet currently is, so it’s easy to see which planet is going where. Obviously, you’d rather protect your more mature planet in the event of a having to choose between two planets to save. 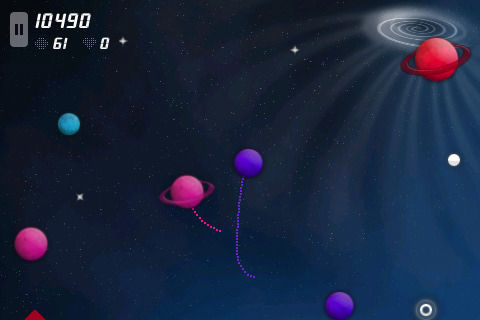 You can play Space Traffic in two modes- either survival mode or time mode. In survival mode, each point of light that you collect will award you 10 points. The “special” points of light will give your planet a ring, and moving the planets with rings into the other galaxy will add more lives to your current game. You can’t lose more planets than the number of lives you have. If you do, the galaxy will be destroyed. In time mode, you start out with 90 seconds on the clock and each rescued planet gives you 10 more seconds. Rescuing planets with rings (from the special points of light) will give you 15 additional seconds.

There is no music in the background of the game. There are sparse sound fx, none of which are very exciting. Also, the game plays verrrrry slow. Once you draw a line from a planet to a point of light or to the other galaxy portal, it takes the planet a while to get there. Even the spaceships and comets don’t move very quickly. I think I would have enjoyed the app. more had there been music and a quicker pace to the game play.

I like the concept of the game, I just think it could use some help in the way it’s executed. But, if you are into more quiet, slow-paced games, then you should enter the world of Space Traffic.