Tower defense games may be all the rage these days, but don’t knock their close cousins, castle defense games, because they can pack quite a punch too. R.O.S.M. has all the elements of a classic tower defense game (fixed paths, upgrades galore…), but instead of a fleet of specialized towers, there is just one super resourceful wizard. Throw in a massive army of irate, but oddly charming monsters, and you have a recipe for a surprisingly fresh and fun finger workout.

After years of having to endure being summoned for petty or humiliating tasks, the monsters have had it! It’s up to you, the wizard, to ward off the disgruntled monsters and keep them from destroying your castle. But what does this mean for you, the player? Lots and lots of finger-swiping!

Unlike, say, Bloons TD, R.O.S.M. keeps you in near constant action. Instead of setting everything up between waves, you must manually cast the spells. There are a ton to choose from, some requiring aiming precision, others are smeared along a line, while others cause massive damage with a tap to charge and then release. There is also a ton of different monsters, so be prepared to think about your strategy as you determine the best way to wipe out the mutinous lot. Your playing style will also play pretty heavily into this, since the upgrade system is quite robust and customizable. 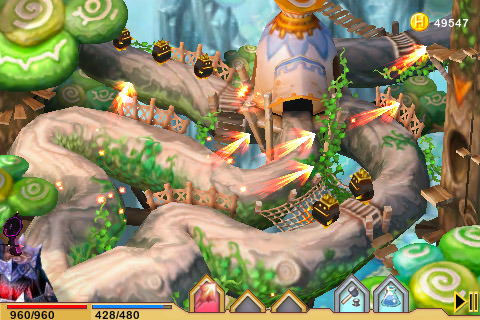 The fast-paced gameplay keeps everything very entertaining, although the action was rather slow initially. If you’re an experienced hand at tower or castle defense, you’ll probably want to start on a harder difficulty level, since Apprentice is really designed for total newbies. The controls aren’t quite perfect; aiming, in particular, is a bit on the fussy side, and dead monsters become an acute source of frustration when their bodies start blocking spells, but once things get going, the game is pretty engaging.

The game itself is quite beautiful, like a watercolor painting come to life. The monster designs are unusual, but also very effective and weirdly attractive, and the backgrounds are altogether stunning. The sound quality is also good, and the music isn’t too bad, so the overall aesthetic quality is surprisingly high. The font choices in the menus could have been better, since they were very small and hard to read, but it’s a tiny quibble with an otherwise great game.

This is a game that will absolutely appeal to both tower and castle defense fans, and other curious gamers shouldn’t be afraid to try it out, since the difficulty can be scaled, it looks great, and it has quite a bit of content and will keep you entertained for a good long while. This one may definitely surprise you.

Here is a video demo of the R.O.S.M. (Revenge of the Summon Monsters) app on the iPhone

This 3rd Party App is available at the Apple iTunes AppStore. Browse the full list of all AppStore apps filed under the AppStore category.
Download R.O.S.M. (Revenge of the Summon Monsters) at iTunes App Store
Price: $1.99
Developer: Website
AppSafari review of R.O.S.M. (Revenge of the Summon Monsters) was written by Tracy Yonemoto on May 21st, 2010 and categorized under Action, App Store, Games, Tower Defense. Page viewed 4487 times, 1 so far today. Need help on using these apps? Please read the Help Page.