Doesn’t white graph paper with blue lines remind you of geometry class? Back in my grade school days, I used to sit in the back of the room doodling on sheets of it instead of drawing bar graphs and perfect circles for the day’s assignment. Graph paper never held much appeal for me–it’s definitely not as appealing as imohoo’s Train Jumper background which looks strikingly like graph paper.

But enough about graph paper. Train Jumper is an action, physics based game featuring a little hero that jumps across the tops of car trains. You’ll control the little caped creature, or TJ as I like to call him, with your device tilting and finger tapping. Controls are dead easy. Simply tilt your iPhone or iPod Touch to make the train move forward, all the while tapping the screen to make TJ jump. Don’t let TJ fall between the cars or hit the wire poles or he’ll go splat! Last as long as possible to score points and you might even manage to get on the online scoreboards on OpenFeint.

The game hardly gets points for originality. There are plenty of games that feature a creature or character you help get across a bunch of obstacles–Pig Rush, ST Action Pig, and Rocket Bird 3D to name a few off the top of my head. But overall gameplay experience is satisfying for a pick-up-and-play game because developers covered all the basics well. The controls are responsive, although you can’t adjust the sensitivity of the tilt feature. There’s a pause button so you can stop your play (but no autosave). The game is super-duper intuitive–more than geometry ever was for me.

As for audio, the soundtrack and sound effects are balanced nicely and enhance play. The soundtrack is a short, upbeat, 3-second music loop that reminds me of the noise a train makes as it moves across tracks. The sound effects are limited to splat! noises and locomotive whistles. If developers wanted to improve Train Jumper, it would be nice if they included a feature that allowed users to silence the default audio and play their own music.

Graphics and animation are what really distinguish Train Jumper from action-physics games of its genre. Each train car has a different design, and they rotate every time you start a new game. The background looks like lovely, white-and-blue graph paper. I especially adore the animation of the moving clouds, spinning wheels, and floating cape. They remind me of children’s picture books or kiddie doodles. All of these contribute to make TJ look like he’s moving when all he’s really doing is jumping in place. 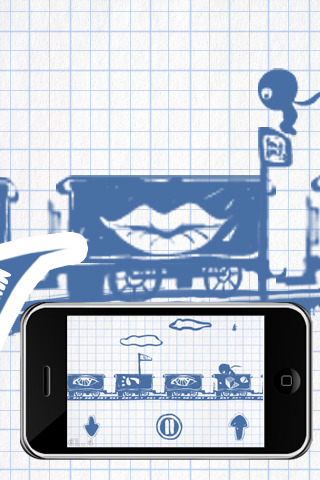 For $0.99, Train Jumper is a great little game. Yes, the game could certainly use some additional obstacles or modes, but I won’t complain. Don’t expect more than simple gameplay with this one. Those looking for complicated strategy should look elsewhere. Embrace all the fun Train Jumper has to offer, and try not to go crazy figuring out how to beat the high score of 1417 points.