If you say that you’re into puzzles, there’s a good chance people will have no idea what you’re talking about, since “puzzle” can mean a lot of things. Jigsaw, sudoku, match-3 games, these are all considered “puzzlers”, but The impossible puzzle revolves around my favorite kind of puzzle, an complete enigma where a big part of the puzzle is to figure out what the heck you’re supposed to be doing. This kind of puzzle isn’t for everyone. In fact, most people get seriously frustrated by it, but there are a few of you who, like me, thrive on this kind of thing.

Without any explanation or instruction, The impossible puzzle challenges you to solve a series of 20 puzzles. To unlock each new level, you must to locate the abstract “face”, and the method for finding the face always varies. Sometimes the object of the puzzle is obvious (spot the differences, rearrange the pieces), but other times it’s much less clear and requires some experimentation. There is no time limit, but each click you make is counted, with the total number of clicks determining your overall ranking.

The total lack of introduction is a little unfortunate, since I found it a little cruel that you are forced to waste precious clicks by floundering to figure out how the game works. Seriously imperfect touch controls also add to the frustration of chasing a low click count, although most of the puzzles don’t require a lot of precision.

What bothered me more was the total lack of a save function, as it was supremely frustrating to close the game after getting several levels in and come back to realize that all of my progress had been erased. 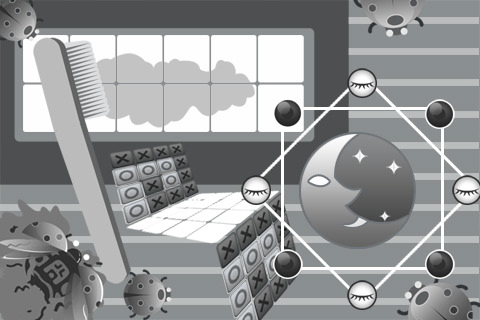 Most of the puzzles are reasonable, but a couple of the puzzles are extremely bewildering. There is no hint system or easily located walkthrough, so when you’re stuck, you’re really stuck. This will almost certainly going to be a dealbreaker for most people, since most modern games give you a lot of help when you need it, and this one has none.

I actually enjoyed the stylized, monochrome design, but I will admit that the grey is on the drab side, and the music and sound effects were only so-so.

Although I spent a great deal of time on a couple of the levels, most of them were very short, and the game would definitely benefit from more levels, better documentation, and a hint system. A gallery menu to revisit old levels would also be really welcome, since a few of the puzzles change every time.

In general, I liked the game, but I also write and regularly participate in puzzlehunts, so I fully recognize that it isn’t for everyone. It also still needs a lot more polish to be truly satisfying to its target audience, but it’s definitely worth a look if you’re a die-hard puzzle fiend, like me.

This 3rd Party App is available at the Apple iTunes AppStore. Browse the full list of all AppStore apps filed under the AppStore category.
Download The impossible puzzle at iTunes App Store
Price: $0.99
Developer: Website
AppSafari review of The impossible puzzle was written by Tracy Yonemoto on May 21st, 2010 and categorized under App Store, Games, Puzzler. Page viewed 3724 times, 1 so far today. Need help on using these apps? Please read the Help Page.